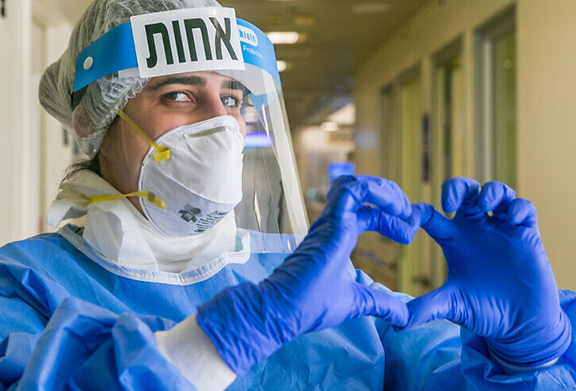 Ichilov Medical team at the coronavirus unit, in the Ichilov hospital, Tel Aviv, Israel, May 4, 2020. Photo by Yossi Aloni/Flash90

A member of the medical team in the coronavirus unit at Tel Aviv Sourasky Medical Center, Ichilov Hospital in Tel Aviv on May 4, 2020. Photo by Yossi Aloni/Flash90.

President Trump renewed his criticism of the World Health Organization on April 30 for the way the United Nations organization failed to challenge false information China initially provided minimizing the coronavirus outbreak in that country. He should also call out the WHO for its disgraceful role in spreading absurd lies and hatred about U.S. ally Israel for years.

Trump recently suspended U.S. funding of the WHO. America is by far the largest donor to the agency and was scheduled to give it $894 million during the current two-year funding period.

The president said that “the World Health Organization should be ashamed of themselves because they’re like the public relations agency for China.” He could have also added that the WHO has operated like a PR and propaganda agency for the enemies of Israel – the only democracy in the Middle East.

A year ago, WHO member countries voted 96 to 11 – with the U.S. in opposition – for an annual resolution blaming Israel for “health conditions in the occupied Palestinian territory, including east Jerusalem, and in the occupied Syria Golan.”

While one might expect the WHO to be apolitical, it – like nearly every other U.N.-associated organ – is used by Israel’s enemies as a platform for viciously attacking the Jewish state. What may be even more disturbing is that democracies that should know better – including France, Belgium and Sweden – joined in the unjustified condemnation of Israel.

As U.N. Watch noted, out of 21 items on the WHO agenda, the only one focused on a specific country applied to Israel. This targeting of Israel has been going on since at least 2000.

U.N. Watch Executive Director Hillel Neuer noted that “anyone who has ever walked into an Israeli hospital or clinic knows that they are providing world-class health care to thousands of Palestinian Arabs.”

It will not be surprising if this year the WHO adopts the usual Israel-bashing resolution and falsely accuses Israel of preventing Palestinians from getting treatment for COVID-19 – the disease caused by the coronavirus.

In fact, Israel is doing a great deal to help the Palestinians contain the coronavirus outbreak that first apparently arrived in the West Bank in Bethlehem.

In Gaza, the Palestinian Health Ministry confirmed the receipt of test kits and medical equipment from Israel that were requested by Palestinian medical personnel.

“Handling the coronavirus outbreak takes precedence over any political consideration, and without help from Israel, Gaza would be in a very difficult situation in the case of an outbreak,” a Palestinian Health Ministry official told the Israel Hayom newspaper.

Prior to the outbreak of COVID-19, Israel permitted thousands of Palestinians to enter Israel for medical treatment. After Israel instituted a lockdown to prevent the spread of the virus, it continued to provide medical supplies to Gaza – 88 tons during one week in April alone.

On March 20, Israel delivered hundreds of test kits and 1,000 protective medical gear kits to Gaza. Five days later, more than 3,000 test kits and 50,000 masks from the WHO were delivered to the Palestinian Authority.

Israeli and Palestinian health and security officials are in frequent contact and have coordinated training sessions for Palestinian medical professionals. A training session was held, for example, for medical staff from Gaza at the Erez Border Crossing by a team from the Sheba Medical Center in Ramat Gan in Israel.

The Palestinians benefit from the Israeli assistance, since Israel was just ranked the safest country in the world during the pandemic by the Deep Knowledge Group.

But despite all this, it will be no surprise if the WHO has the chutzpah to condemn Israel this year once again. We don’t know if Western democracies will again go along.

Just five months ago, the Palestinian Authority objected to an American plan to build a hospital in Gaza. And, of course, the same group has utterly rejected the peace plan advanced by President Trump to end hostilities between Israel and the Palestinians – and has even cut off contacts with the Trump administration.

Hamas goes even further, refusing to even acknowledge Israel’s right to exist and harshly condemning the U.S. and the Trump administration.

In 2017, reportedly under pressure from Syria, the WHO hid a positive report on Israel. This was especially galling given that four years earlier the Israel Defense Forces had begun treating hundreds of sick and wounded Syrians at field hospitals staffed by volunteers in the Golan Heights.

In 2016, the Israel Defense Forces launched Operation Good Neighbor to expand its aid program and allow Syrians to be treated in Israeli hospitals. According to the IDF, more than 4,900 Syrians – including 1,300 children – were brought to Israeli hospitals during the five years of providing medical assistance.

The operation was shut down in September 2018 after Syria’s brutal dictator Bashar Assad reestablished control over southern Syria in that country’s civil war.

While the WHO condemns Israel for health conditions on the Golan Heights, it says nothing about Assad’s attacks on hundreds of Syrian medical facilities and the humanitarian disaster he has created in the war against his own people. The WHO simply refers to “attacks” as if no one is responsible.

Meanwhile, Israeli medical supplies have continued to flow into Gaza even as terrorists attack Israelis at the border and fire rockets into civilian areas. Tens of thousands of Palestinians from the West Bank and Gaza are admitted to Israel every year for medical treatment.

Even Palestinian leaders who call for Israel’s destruction send their family members to Israeli hospitals. For example, Hamas leader Ismail Haniyeh’s daughter was hospitalized in Ichilov Hospital in Tel Aviv. His brother-in-law, mother-in-law and one of his granddaughters were also treated in Israel.

The sister of another senior Hamas leader, Mousa Abu Marzouk, was treated in Israel for cancer and an Israeli medical specialist went to Ramallah on the West Bank to help save the life of Palestinian Authority president Mahmoud Abbas. A year later, Abbas said Palestinians would be barred from treatment in Israel.

If the WHO had any integrity and honesty it would be praising Israel as a model of good neighborliness for the massive medical assistance is has provided to the Palestinians for years, including during the coronavirus pandemic.

The truth is that Israel has done far more than both the Palestinian Authority and Hamas to care for the health of the Palestinian people. It’s long past time for the WHO to recognize this and end its dishonest Israel-bashing campaign once and for all.

Dr. Mitchell Bard is executive director of the American-Israeli Cooperative Enterprise and author/editor of 24 books including “The Arab Lobby” and “After Anatevka: Tevye in Palestine.”