Pursuing Prosperity Pushes Politics to Side for Israelis, Palestinians 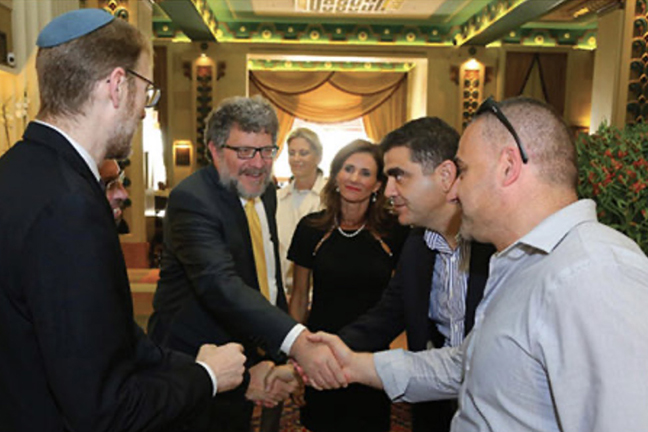 As I write this, I am beaming.

I just got off an amazing webinar — a virtual Town Hall meeting where the Birmingham-based US Israel Education Association was one of the hosts.

Featured was a remarkable process that USIEA has helped to catalyze — growing economic cooperation and business integration between Israelis and Palestinians living in Judea and Samaria, the Biblical name for the disputed West Bank.

Putting politics aside, and with USIEA serving as a start-up funder and a catalyst, this process now involves 700 businesses in Judea and Samaria that provide venues for Israelis and Palestinians to come together for their mutual economic betterment.

USIEA, led by Birmingham’s Heather Johnston, is working with two partners in this endeavor — the Indianapolis-based Sagamore Institute and the Judea and Samaria Chamber of Commerce, co-founded by an Israeli and a Palestinian. USIEA and these partners have come together to form the Integrated Business Roundtable.

“The Integrated Business Roundtable was launched in January 2020 to advocate for the shared prosperity of Israelis and Palestinians through an integrated economy and faith-inspired impact investing in Judea and Samaria,” explained a news release about the meeting. “Roundtable’s partners are unified in the conviction that increased direct investment in high quality business is the sturdiest pathway to unlocking economic potential, sustainability, and eventual peace in the region.”

Having been involved in organizational work related to Israel for almost 40 years, mainly as executive director of the Birmingham Jewish Federation, I have never seen a more powerful example of Israeli-Palestinian cooperation. Nor a program filled with such promise.

The highlight of the virtual Town Hall was a powerful segment featuring two female entrepreneurs, an Israeli and a Palestinian, who have come together to form a company which, through the Internet, is improving the health of Arabs throughout the Middle East. Watching these creative, determined businesswomen from different cultures interact as partners and friends was extraordinary.

Israeli Avi Zimmerman, known to many in the Southeast U.S. for his years of work on behalf of the city of Ariel, a West Bank municipality that is the capital of Samaria, moderated the program. Zimmerman is now president of the Judea and Samaria Chamber of Commerce, which he co-founded with West Bank Palestinian community leader Ashraf Jabari of Hebron.

Despite these growing business relationships between Israelis and Palestinians, opposition from the Palestinian Authority, the official entity overseeing Palestinian life in Judea and Samaria, often hovers like a dark cloud over the breakthroughs that are being achieved. For example, a video of the session involving the two businesswomen cannot be released publicly out of fear for the Palestinian woman’s well-being.

What can be released is this two minute video, made last year at the USIEA-sponsored inaugural forum in Jerusalem, that brought Palestinian and Israeli business leaders together for the first time formally to break down barriers and begin building economic bridges between these two groups, who are often portrayed as enemies.

One of those who has played a leadership role in this process is retired General Charles Krulak, a former Commandant of the Marine Corps and a USIEA board member.

“It is breath-taking to witness the new friendships and business partnerships that are taking hold and flourishing between West Bank Israelis and Palestinians,” the General explains.

“Regardless of one’s political views when it comes to Israel, USIEA’s Israeli-Palestinian economic initiative is something that I believe that Members of Congress and Americans from both sides of the political spectrum can support enthusiastically,” added Krulak. One of USIEA’s main purposes is to educate Congress regarding Israel.

Asked to offer a perspective on the uniqueness of this endeavor from his vantage point as president of the Judea and Samaria Chamber of Commerce, Zimmerman said “Ashraf and I, along with a large number of Israelis and Palestinians, live in a disputed, politically-charged region. But what makes the integrated business process work is not only a mutual desire for a better life and prosperity, but a recognition that conflict does not define us. If we wait for political issues to be resolved before moving forward on the economic front, the opportunity to better our lives and the lives of our families will continue to remain on hold.”

(Richard Friedman is associate editor of Israel InSight and Director of Funding Initiatives for the US Israel Education Association.)