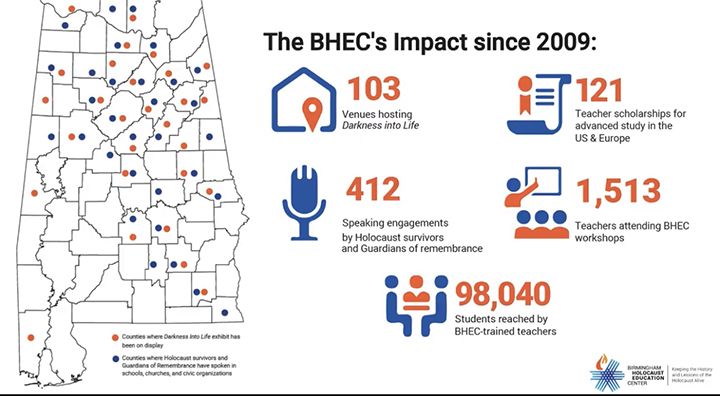 The Holocaust was German leader Adolf Hitler’s partially-successful attempt in the early 1940s to exterminate the Jewish people, most of whom had nowhere to flee.  The rebirth of Israel in 1948 as a modern Jewish state and land of refuge for Jews would ultimately provide a haven for Jews escaping persecution and antisemitic violence, though it came too late for the victims of the Holocaust.

During the Holocaust, Hitler’s Nazis and their collaborators killed 6,000,000 Jews, almost a third of the world’s Jews at the time. Had there been an Israel for these desperate and defenseless Jews to flee to, millions might have been saved. And that lesson is never lost on those who reflect on the Holocaust and its implications for the Jewish people.

Amid rising antisemitism in the US, Europe and other parts of the world, Albright’s and Pearl’s remarks stressing the importance of Holocaust education were especially timely.

“We can share the testimony of survivors, including those who have enriched the life of communities across Alabama,” said Albright.  “That is the most we can do, that is the least we can do — it is what we owe to the past, it is our hope for the future and, in a larger sense, it is the hope for the world.”

Albright served as Secretary of State under President Bill Clinton in the late 1990s.  As an adult, she came to learn that her own European family had been disrupted by antisemitism as the Nazis were coming to power. Albright has said that at age 59, she learned for the first time that both of her parents were born into and raised in Jewish families.  However, her parents, while living in Europe, converted to Catholicism in 1941 to avoid anti-Jewish persecution.  They later immigrated to the U.S.

Speaking to the BHEC audience, the former Secretary said, “As the Holocaust reminds us, we must never allow the distinctions that define us to obscure the common humanity that binds us.” Striving for this goal reflects what Holocaust education is about, she said, and achieving this goal is more important now than ever.  “We can remember the Holocaust and vow ‘Never Again’… We can make certain that the dead shall never be forgotten from our hearts,” said Albright as she thanked the audience for supporting BHEC.

Auburn’s basketball coach was interviewed during the program by Tricia Skelton, 6th grade teacher at Opelika Middle School, who has benefited from BHEC training for educators. Pearl reflected on the organization’s continuing and successful efforts to train teachers to teach the Holocaust. Said Pearl, “We need to teach our teachers how to teach one of the world’s greatest tragedies of all time to children who have never been exposed to it, and who have no idea what the Holocaust is about — and then help them relate it to things that they are going through in their own lives.”

Pearl became emotional when he talked about his grandfather fearing the destruction of Israel in the 1967 war, and Jews again becoming vulnerable, as they were during the Holocaust, with no other place to go. “He made me promise him that the words ‘Never Again’ would actually mean something to me, and I promised him that I would do the best I can.”

Pearl, who is 60, recalled growing up in the Boston area during a time of racism and antisemitism and said, “I couldn’t understand why people were scared by the things that make us different. So much of this stems from a lack of exposure… As we grow older we develop prejudices and become ignorant because of lack of exposure and fear of the unknown… the answer is education and exposure.”

During his long career as a coach, Pearl has made efforts to educate his players about the Holocaust and also has aspired to take his Auburn team to Israel.

Another emotional component was a dramatic monologue performed by a Birmingham Jewish teenager, Kyra Berger, of the Red Mountain Theatre Company. Her dramatic reading was set in Europe as the Holocaust was unfolding and expressed the fear, desperation and confusion through the mind and heart of a Jewish teen. “Being Jewish is a good thing… what have we done wrong?” she anguished. “Now they hate us, just because we are Jewish… they want us to suffer, they want us to die… What have we done wrong, I don’t understand.  Is evil stronger than good?  How can this be so?”

The monologue was written by long-time BHEC leader Deborah Layman.

The annual BHEC program, known as “L’Chaim,” which in Hebrew means “to life,” was held virtually because of the current COVID pandemic.  It included remembrance of the Holocaust, musical and dramatic inspiration, powerful commentary, and the solemnity of reflection coupled with celebration of BHEC’s achievements.

Particularly moving was a short video message from BHEC founder Phyllis Weinstein, a legendary Jewish community volunteer, who is now 99 years of age.  “In 2002, when we began as the Birmingham Holocaust Education Committee (now Center), we never dreamed 18 years later that we would be welcoming national speakers such as Madeleine Albright and Bruce Pearl.  I am indebted to the volunteers, professional staff, you (the audience) and many others,” she said.

Not only was the event a fundraiser and showcase for the importance and success of BHEC’s work, it also was to honor local businessman, civic leader and philanthropist David Silverstein and his wife Susan.  They were honored for supporting and promoting BHEC’s mission: “Keeping the history and lessons of the Holocaust alive.“

BHEC executive director Rev. Melissa Self Patrick spoke at the conclusion of the program, reflecting on BHEC’s achievements over the past 10 years.  Honorary co-chairs were volunteers Kate Cotton, Cathy Friedman and Jim Richardson. Others participating included L’Chaim 2020 Host Committee, Red Mountain Theatre, and the BHEC Board of Directors. The entertainment was produced by Keith Cromwell at Red Mountain Theatre. Jeff Eliasoph, an anchor/reporter for WVTM 13 News, was emcee for the event.

As the program concluded, it was announced that the fundraising had approached $370,000, an amount that has increased since the event. Click here to watch a video of the program.