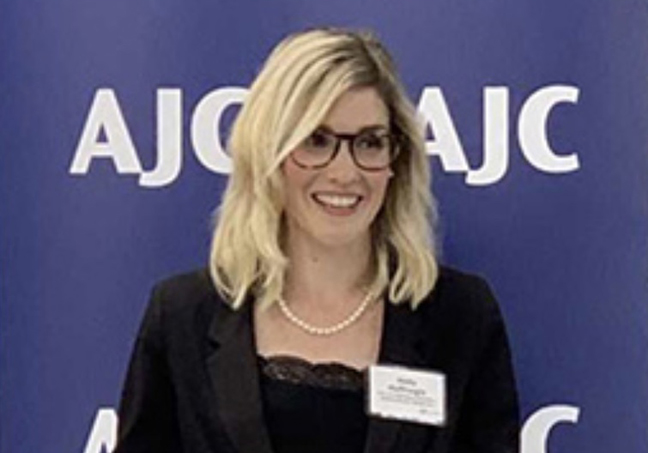 Criticism of Israeli policies is fair game — it can be expected of a robust democracy. What is not fair game, however, are antisemitic attacks against Israel, in which the world’s only majority Jewish state is demonized and delegitimized. And the American Jewish Committee, an important Jewish organization known worldwide, has taken a bold step to combat such attacks.

To counter antisemitism in the United States, including anti-Israel antisemitism, AJC has tapped a Christian woman, Holly Huffnagle, to lead these increasingly-crucial efforts.

Huffnagle, an expert in antisemitism, is adept at connecting historical dots.

“Many of the antisemitic tropes and conspiracies used today by the far-left or Islamist extremists, two of the major sources from which anti-Israel antisemitism emanates, are borrowed from Christian anti-Judaism and medieval Christian Europe,” she laments. For instance, the medieval trope of the blood libel — the accusation that Jews kidnapped and murdered Christian children to use their blood for ritual purposes — which resulted in thousands of innocent Jewish deaths, is being recycled in the Middle East today.

“We have seen grotesque cartoons of Israelis drinking Palestinian blood or Israeli soldiers ‘crucifying’ Palestine, represented by Jesus Christ, with the words ‘Don’t kill him again’ — an evil image and phrase which invokes the antisemitic deicide charge, where Jews were blamed for millennia for the death of Christ.”

Responding to antisemitic attacks against Israel has been a major thrust of AJC’s work for decades. Part of Huffnagle’s portfolio will include serving as a point person in this crucial area domestically. “We will only be effective against rising antisemitism in the United States when we understand all its sources, including how anti-Israel animus can cross into antisemitism,” Huffnagle notes.

But she emphasizes that “We also need to be careful. We need to be as accurate as possible and not overstate the problem. People have told me all criticism of Israel is antisemitism. That is not true. When we use the term injudiciously, we devalue it.”

Failure to do more

Huffnagle is motivated in part by a desire to right the past wrong of the role Christianity played in harming Jews over the centuries (which, thankfully, are largely things of the past), and for the failure of Christian leaders to do more to save Jews during the Holocaust.

Moreover, Huffnagle, whose grandfather was a Baptist minister, adds, “I have a lot of members of my extended family who are very pro-Israel from an Evangelical standpoint.” In recent years, some of Israel’s most effective and passionate advocates have come from the Evangelical community. Many evangelicals believe the return of the Jewish people to their ancient homeland and the rebirth of Israel as a modern Jewish state are the fulfillment of Biblical prophecy.

“Personally, I fight antisemitism because it is the right thing to do and I want to ensure Jewish communities live in safety and security today,” explains Huffnagle. “I have not paid attention to end times prophesies or dispensationalist arguments in my work.”

Huffnagle has built an impressive resume as a leader in the fight against antisemitism. She’s taught American Christians about antisemitism and hostility and hatred toward Israel; worked at the U.S. Holocaust Memorial Museum in Washington, and served in the U.S. State Department’s Office to Monitor and Combat Anti-Semitism. She also has spent extended time in Poland studying the Holocaust.

“Where I got started working on Jewish issues and combating antisemitism was through learning about the Holocaust while studying in Europe with Westmont College,” explains Huffnagle. “For me, as a Christian, I had a hard time understanding how the Holocaust — the murder of 6 million Jews — could have happened in Christian Europe. I did not know the history of Christian anti-Judaism — it was a big wake up call.”

Though Huffnagle grew up in California, much of her family history on both sides is rooted in the South. She is descended from ancestors who arrived in the port of Charleston in the late 1600s. Her forebears would make lives for themselves in Alabama, Louisiana and Mississippi, among other Southern states, as their American journey unfolded.

Huffnagle has discovered that her Mississippi family had important connections to the Jewish community. Her grandmother played the violin at religious services at Temple Beth-El in Lexington, Miss. Her grandfather was given a leather-bound Jewish Publications Society edition of the Torah as a gift from Jewish friends. In a recent virtual interview, she showed the book as well as a printed program from the synagogue featuring her grandmother’s name.

While that keepsake program is a source of pride for Huffnagle, as a student of the Holocaust she noted its additional significance: “The program was from June, 1941, the same month as ‘Operation Barbarossa,’ a turning point in Adolf Hitler’s expansion of power.”

Eventually, the Nazis and their collaborators would murder 6 million defenseless European Jews, most of whom had no place to go. Had there been an Israel at the time — a safe and sovereign Jewish homeland for Jews to flee to, this horrific chapter in history would have ended differently. Huffnagle and others who study the Holocaust understand this well.

Naming her AJC’s U.S. Director for Combating Antisemitism has caught the attention of many, mainly because Huffnagle is not Jewish.

Though much has been made of the AJC hiring a Christian for this high-profile position, Huffnagle downplays this to an extent. “My goal is to bring a perspective from outside the Jewish community,” she explains. “I just happen to be Christian.” Antisemitism, she emphasizes, is not just a Jewish problem; when it erupts, it endangers the broader society as well.

AJC has made a bold, but certainly a thoughtful and strategic choice, in sending this charismatic young Christian to the forefront of the antisemitism battle. If energy, determination, knowledge and a fresh point of view can help turn back this growing scourge, then AJC, one of America’s oldest Jewish advocacy groups, has chosen well.

In her new role at AJC, Huffnagle will coordinate and track her organization’s efforts to combat antisemitism nationally. Her job additionally allows her to develop and initiate new projects and campaigns. She will soon be moving from California to Washington because her job also entails working with the federal government on antisemitism issues.

While Huffnagle’s assignment is dreadfully serious — helping to combat the worst antisemitism since the Holocaust — her personality, as reflected in the interview mentioned above, remains upbeat, fresh and inspiring. These traits, coupled with her knowledge, passion for her work and uncompromising sense of purpose, create a formidable arsenal which the energetic Huffnagle clearly is ready to put to use — for a cause she cares about, and a cause she believes all people should care about.