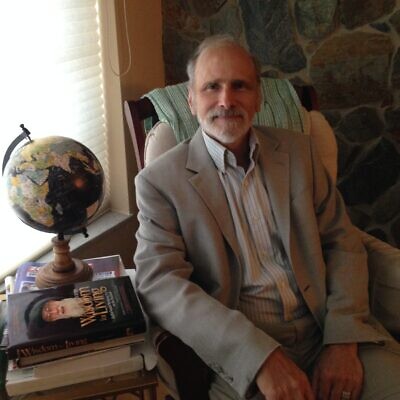 (JNS) — In a rare move, the Philadelphia chapter of the Council on American-Islamic Relations (CAIR) joined a chorus of criticism aimed at a local black Muslim leader who posted anti-Semitic tropes to his social media. Rodney Muhammad, president of the Philadelphia chapter of the National Association for the Advancement of Colored People (NAACP) and a local Nation of Islam leader, shared an insulting image of a Jewish caricature on Twitter with a caption explaining: “To learn who rules over you simply find out who you are not allowed to criticize.”

“We need to unequivocally reject anti-Semitism,” CAIR-Philadelphia wrote in response on Facebook.

But less than 24 hours later, CAIR-Philadelphia executive director Jacob Bender, a Jewish American,co-wrote an article that contains an even more shameful anti-Semitic assault, falsely accusing American Jews of using the Holocaust to deflect criticism of Israel.

Even though the article was primarily about a spat between Rep. Alexandra Ocasio Cortez (D-N.Y.) and Rep. Ted Yoho (D-Fla.) — a topic that has nothing to do with Israel — Bender’s anti-Semitism is so entrenched that he couldn’t resist using the opportunity to make a grotesque accusation against American Jews. Bender wrote that Jewish Americans “will argue that slavery is dwarfed by the Holocaust” and engage in “counting the corpses competition.”

“[W]ithin the American Jewish community, untold resources have been utilized in maintaining the priority of the Holocaust, where the Nazi genocide is often employed as a weapon to delegitimize criticism of Israel’s occupation of Palestinian lands and relabeling this criticism as anti-Semitism,” he added.

The similarity between Muhammad’s anti-Semitism and Bender statement is glaring. Both fallaciously accuse Jews of possessing overwhelming power, which they freely exploit to oppress, intimidate and stamp out worldwide criticism of Jews and Israel.

While Bender makes it appear as if his only gripe with Israel is out of concern for the “human rights” of the Palestinian Arabs, he has gone on record as a CAIR leader expressing full support for the BDS movement, which its founder, Omar Barghouti, fully admits was founded to wipe Israel off the map.

Under the guise of Jewish-Muslim rapprochement following the shooting attack on Chabad of Poway, Calif., Bender collectively slandered American Jews for not supporting the “BDS movement against Israel.” In fact, Bender admits that he opposes the very existence of Israel, calling the idea of the Jewish state “a mythology about ‘a people without a land for a land without people.’ ”

To him, Israel resembles 1964 Mississippi and refers to the creation of the Jewish state as the nakba, meaning “catastrophe.”

As with Muhammad, Bender is echoing classic anti-Semitic tropes. According to the International Holocaust Remembrance Alliance, an organization consisting of leading educators and academics from 34 member countries, examples of anti-Semitism include: “Denying the Jewish people their right to self-determination, by claiming that the existence of a State of Israel is a racist endeavor” and “holding Jews collectively responsible for actions of the state of Israel.” Thus, it’s hard to take Bender’s criticism of Muhammad seriously.

Bender’s statement is in line with numerous other examples of CAIR’s anti-Semitism. The organization urged supporters to lobby against the “Anti-Semitism Awareness Act of 2019,” legislation directing the U.S. Department of Education to adopt the same IHRA definition of anti-Semitism that the U.S. State Department embraced in 2016.

CAIR leaders have consistently claimed that Jews control the U.S. government, such as when CAIR executive director Nihad Awad told a Muslim Students Association audience to consider the Jewish origin of many Clinton administration officials. In addition, the Muslim civil-advocacy organization sought to widely distribute a version of the Koran approved by radical Wahhabi clerics, even though a Los Angeles school district banned it from local schools for being anti-Semitic.

The same bigotry exists at CAIR-Philadelphia, which has a history of downplaying anti-Semitism from local Islamists. When the Philadelphia branch of the Muslim American Society (MAS) uploaded a video of children singing, “We will chop off their heads, and we will liberate the sorrowful and exalted Al-Aqsa Mosque,” Bender said the incident “was not an example of radicalization.” MAS is a fellow Islamist organization tied to the Muslim Brotherhood, and it’s difficult to imagine Bender giving similar latitude to, say, a white-supremacist group.

When Imam Abdelimohsen Abouhaab delivered three anti-Semitic sermons at the Al-Aqsa Islamic Society in North Philadelphia, not only was CAIR-Philadelphia silent about it, but it rewarded the mosque leader by hosting him at its upcoming banquet.

While CAIR has no issue denouncing anti-Jewish hate by white supremacists or the Nation of Islam—a black separatist, pseudo-Islamic religious movement—its members are reluctant to condemn the same offenses from Arab or South Asian Sunni Muslims. In a rare occurrence in 2018, CAIR-New Jersey denounced statements from an American Muslims for Palestine (AMP) official who repeated the classic anti-Semitic trope that Ashkenazi Jews are not ethnically Jewish. However, after experiencing pushback from AMP and its Islamist supporters, CAIR corrected its previous statement and insisted that it “did not condemn” its close ally AMP.

It is easy to guess why CAIR would give a free pass to AMP, an allied Islamist organization that hails from the same pan-Islamic Muslim Brotherhood network as CAIR, while holding a Nation of Islam leader accountable for offenses that Bender and his colleagues commit with regularity. As with many African American Muslims, Nation of Islam members have been pushed to the social and political fringes by immigrant Islamist organizations. Economic disparities have been a source of ongoing tension between these co-religionists, and many American mosques are divided along lines of class and race.

These divisions, as well as CAIR’s undeniable hypocrisy when it comes to anti-Jewish bigotry, places the civil-rights group in a poor position to lecture fellow Muslims about anti-Semitism.

Indeed, just five days after Muhammad’s anti-Semitic tweet, the preacher’s Nation of Islam congregation posted a message to Facebook accusing “Jewish scholars and rabbis” of “using the Black Man and Woman as scapegoats for their own economic and political advancement.” Another recent post blamed the Aug. 23 police shooting of a black man in Kenosha, Wis., on joint training between American and Israeli law enforcement.

More than a month after state leaders such as Pennsylvania Gov. Tom Wolf and Attorney General Josh Shapiro joined the Jewish Federation of Greater Philadelphia in calling for Muhammad’s resignation, the national NAACP announced plans to replace the chapter’s current leadership. This is a great first step in recognizing the systemic anti-Semitism that permeates some local community organizations. Still, Philadelphia leaders must be consistent in denouncing anti-Semitism, and they can start by taking a stand against CAIR for its own atrocious history of anti-Jewish hate.

Leonard Getz, CPA, is the Pennsylvania associate with the Counter-Islamist Grid, a project of the Middle East Forum. He is also a freelance writer and the author of the book “From Broadway to the Bowery.”