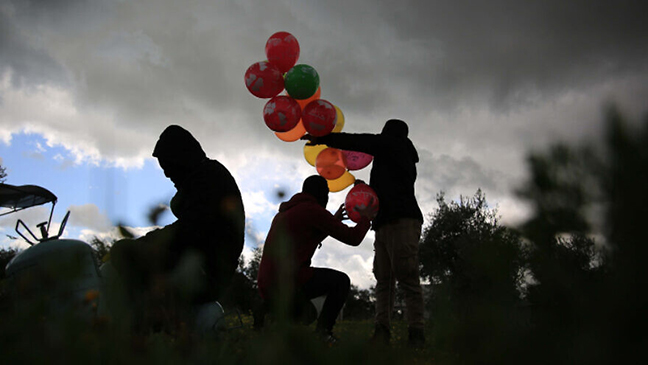 Young Palestinian men prepare a flammable object to be flown toward Israel, near the Israel-Gaza border east of Al-Bureij refugee camp in the central Gaza Strip on February 10, 2020. Photo by Ali Ahmed/Flash90

Palestinians prepare an incendiary device to be flown towards Israel, near the Israel-Gaza border in the central Gaza Strip, Feb. 10, 2020. Photo by Ali Ahmed/Flash90.

(JNS) — For weeks while communities in Israel burned, many major U.S. news outlets kept silent. Hamas, the U.S.-designated terror group that rules the Gaza Strip, has been intermittently launching firebombs into the south of Israel for years. Yet Hamas’s terrorism by fire was largely ignored during the summer of 2020.

By repeatedly launching incendiary devices into Israel, Hamas and other Gaza-based terror groups have violated numerous ceasefires. The damage has been extensive.

According to an Aug. 28 press release by Jewish National Fund-USA, almost “600 fires caused by incendiary and explosive-laden balloons sent by terrorists in the Gaza Strip have plagued Israel’s Gaza Envelope region over the past 19 days as thousands of acres have been destroyed.” On Aug. 23 alone, more than 28 fires were started by devices launched from Gaza. Nor is it merely balloons; as the Times of Israel reported “rockets have also been fired on multiple occasions at Israeli cities and towns, including over a dozen projectiles” on Aug. 20.

JNF-USA has helped to combat the fires by investing in firetrucks and firewagons. The threat to many communities in Israel’s south has been so pervasive that JNF-USA has helped develop “new, often fortified playgrounds, schools, parks and other amenity-enhancing projects.” Keith Isaacson, the head of security for Israel’s Eshkol region, lamented: “You can see that the forests are suffering. The wildlife is suffering. Instead of green behind our houses, we have black.”

As Ynet news previously reported, in February 2020 explosives-laden balloons landed in a preschool in the southern Israeli Kibbutz Sa’ad. More recently, others have landed near playgrounds. On several occasions, terrorists have attached the balloons with Disney characters—a tactic meant to entice unsuspecting children.

Israel, meanwhile, has responded with targeted strikes aimed at the terror network and its infrastructure.

The Washington Post, one of the few newspapers to still maintain a foreign bureau in Israel, has failed to provide any original reporting on the recent increase in balloon attacks. The Post last reported on the IEDs in March, but during the increase in attacks over the summer, it has declined to offer coverage of its own. Instead, the daily newspaper has merely reprinted AP dispatches. In recent months, the Post has filed dozens of reports on the possibility of Israel applying sovereignty to portions of the West Bank (Judea and Samaria). Yet in-depth coverage of fire terrorism in Israel’s south — and its costs — has been conspicuously absent.

Sadly, this omission is the rule and not the exception.

USA TODAY, The Baltimore Sun, The Philadelphia Inquirer, Politico and Foreign Policy, among others, have also largely ignored the flames engulfing Israeli communities and land. This, despite reports by outlets like BBC — whose anti-Israel bias has been documented by the Committee for Accuracy in Middle East Reporting and Analysis (CAMERA) UK — warning that Israeli leaders told Hamas that a failure to stop the attacks would result in a “major escalation in the Gaza Strip.” Nonetheless, the press is failing to provide readers with coverage of a developing and dangerous situation in a country that is frequently the subject of disproportionate, and sometimes trivial, news coverage.

The lack of reporting is all the more conspicuous considering the number of correspondents tasked with covering Israel. As Matti Friedman, a former AP reporter, observed in 2014, the AP had more news staff covering Israel and Palestinian-ruled territories than it had “in China, Russia or India, or in all of the 50 countries of sub-Saharan Africa combined.”

“Staffing,” Friedman noted, “is the best measure of the importance of a story to a particular news organization.” By this standard, leading news organizations have clearly decided that Jewish communities being set ablaze is no story at all.

Sean Durns is a senior research analyst for CAMERA, the 65,000-member, Boston-based Committee Accuracy in Middle East Reporting in America.