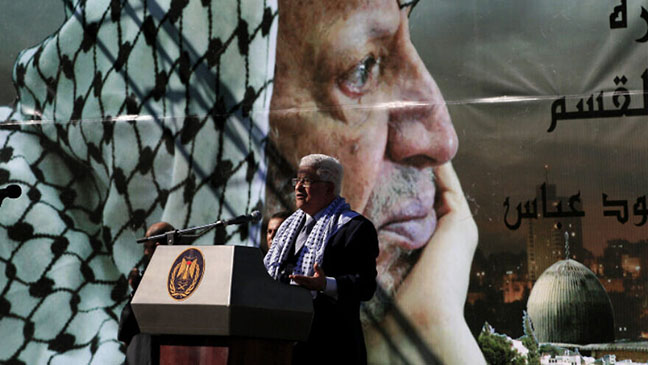 Palestinian president Mahmud Abbas addresses a rally commemorating the fifth anniversary of late Palestinian leader Yasser Arafat's death in the West Bank city of in Ramallah on November 11, 2009.Abbas stood by his demand for a complete Israeli settlement freeze as he addressed tens of thousands of Palestinians gathered to honour Arafat Photo by Issam Rimawi/Flash 90

(JNS) — Earlier this month, the Harvard Kennedy School of Government announced that PLO executive committee chairman Saeb Erekat has been hired as a senior fellow for the school’s Future of Diplomacy Project for the 2020-21 school year. This week, former senior Justice Department official attorney Neal Sher sent a letter to U.S. Attorney General William Barr and Acting Homeland Security Secretary Chad Wolf asking that Erekat be denied a visa to the United States.

Sher noted that Erekat’s long record of supporting terrorism as a senior PLO official includes numerous acts of inciting, facilitating and soliciting terrorism. According to the U.S. Immigration and Naturalization Act, Sher argued, Erekat is legally barred from setting foot on U.S. soil.

The timing of Sher’s letter was noteworthy.

Arafat called the terrorist war “the Al-Aqsa Intifada.” The name sent a signal to the Islamic world that the Palestinians were the advance guards of the global jihad.

Despite the P.A.’s acts of slaughter and incitement, despite its complete abrogation of all of its commitments to live at peace with Israel, and its embrace of the global jihad, no one disavowed the P.A. Israel continued to seek peace through appeasement. Washington continued to treat P.A. leaders as credible peacemakers even as they oversaw the massacre of hundreds of innocent Israelis. So did the wider international community.

Then-Prime Minister Ehud Barak learned neither from Arafat’s cold shoulder at Camp David nor from the terrorist offensive he launched in September. Barak continued to beg Arafat for peace even as the streets of Jerusalem and Tel Aviv ran red with the blood of Israelis. At Taba, Barak’s negotiators made even more lavish offers for Israeli surrenders of land for peace than the offer he made at Camp David.

And the death toll continued to rise.

Even after the administrations changed in Washington and Jerusalem, the Bush administration and the Sharon government maintained their slavish devotion to the fiction that the PLO was Israel’s peace partner.

When, after Sept. 11, 2001, then-President George W. Bush declared war on “global terrorism,” he made a carve-out for Palestinian terrorism. Two months later, his secretary of state, Colin Powell, declared that the administration supported Palestinian statehood.

In 2007 and 2008, Bush’s Secretary of State, Condoleezza Rice, devoted near manic efforts to achieving a peace deal between Israel and the P.A. Her favored method for achieving progress was not to compel the P.A. to end its support for terrorism and Israel’s destruction. It was to pressure Israel to make concessions to the P.A.

In 2008, then-Israeli Prime Minister Ehud Olmert made Arafat’s heir, Mahmoud Abbas, an offer of peace even more generous than Barak’s offer at Taba. And like Arafat before him, Abbas didn’t even bother to acknowledge Olmert’s offer. Instead, he stepped up his political war against Israel and expanded the P.A.’s financial support for terrorists.

Throughout his eight years in office, Barak Obama made supporting the Palestinians and their unrelenting war against Israel his highest goal. His method for advancing it was applying unrelenting pressure on Israel and showering it with abuse, threats and condemnations.

The P.A., needless to say, returned the favor by spurning Obama’s peace plan.

What stood behind this delusional response to Palestinian aggression? Why did the United States and Israel continue to lavish the P.A. with financial, political and military support instead of blackballing it and shutting it down?

The main reason was because for the past generation, the establishment view of the Middle East was that there could be no resolution of the Arab world’s conflict with Israel until the Palestinian conflict with Israel was resolved. And the way to resolve that conflict wasn’t by forcing the Palestinians to choose leaders that supported coexistence with Israel. It was by forcing Israel to appease the PLO through land surrenders. In other words, the idea that all the who’s who from Washington to Paris to Berlin to Tel Aviv subscribed to was that Israel was the side that needed to change for there to be peace — not the Palestinians.

Among the Israelis — who were the direct victims of Palestinian aggression — the majority of the public realized by 2000 that the peace process with the PLO was fake and that Israel needed to disavow it and set out on a new course. But despite the ever-rising casualty count and the unprecedented campaign of delegitimization against Israel led by the PLO and joined by the European Union and the United Nations, Israel maintained its allegiance to the phony peace process and continued to support its enemy and phony peace partner because two powerful constituencies insisted on it.

The Israeli left, including the media, and Israel’s security brass refused to accept the implications of the PLO’s command of the terror war. They would not reconcile themselves to the reality literally exploding all around them, that the PLO and its P.A. were Israel’s enemy, not its peace partner, because they couldn’t imagine a situation in which the Palestinian cities and villages run by the P.A. would be run by anyone else.

There were many reasons for this willful delusion. Some feared Palestinian demography. Some were driven by hatred of the Israeli right. Many — from the far left to the IDF General Staff to the top echelons of the Israel Security Agency to the Foreign Ministry — were simply unable to admit that they had been mistaken in their support for the peace process with the PLO. For these reasons and others, Israel’s security establishment and political left refused to get their heads around the basic fact that even if there was no good alternative to the PLO-run P.A., that didn’t make the PLO-run P.A. a viable alternative. The PLO-run P.A. is a hostile, corrupt, corrupting and dangerous enemy. And it will never, ever change.

Abbas regularly threatened to shut down the P.A. unless he received further billions of dollars in funding from the European Union and the United States and tax revenues from Israel. Abbas felt comfortable repeating his threat because he knew that he was the irreplaceable man and that his regime was the irreplaceable regime. Without them, after all, the “experts” from Brussels to Boston to Haifa insisted, there could never be peace anywhere in the Middle East. Obviously, the world powers had to continue propping up the P.A. Obviously, the IDF General Staff had to insist that Israel’s tax authority continue collecting taxes for the P.A. and transferring the revenues to Abbas’s bank account.

The peace agreements Israel signed with the United Arab Emirates and Bahrain at the White House on Sept. 15, and the Arab League’s rejection of the PLO’s demand to condemn the deals, demonstrate the idiocy of the notion that the Palestinians are now, or ever have been the key to Middle East peace. Far from being the key to peace, the PLO is irrelevant to peace. The moment the leaders of the UAE and Bahrain decided that making peace with Israel served their interests, they made peace with Israel. The Arab League’s refusal to condemn them points to the depth and breadth of support for relations with Israel among Arab leaders.

This brings us back to Sher’s letter about Erekat. There is no question that Erekat has played a key role in facilitating Palestinian terrorism for more than a quarter century. As recently as June he falsely accused Israel of “executing” an innocent Palestinian. Erekat’s cousin Ahmad Erakat was killed by Israeli forces at a checkpoint south of Jerusalem after he tried to kill them by ramming them with his vehicle. His terrorist act was captured on film.

Erekat’s most notorious and successful effort to spread blood libels against Israel occurred in the wake of the bloody battle in Jenin during “Operation Defensive Shield” in April 2002. Jenin had been the terrorism capital of Judea and Samaria. In March 2002, numerous suicide bombers were deployed to Israeli population centers from the city.

In the course of the battle, IDF reservists fought terrorists everywhere. All the buildings in the area had been booby-trapped. Twenty-three IDF soldiers were killed. Some 53 Palestinians, most of whom were armed terrorists, were also killed.

But just as Erekat portrayed his would-be killer cousin as a martyr, so he misrepresented the battle in Jenin. In the wake of the battle, he appeared on CNN three times and accused Israel of massacring more than 500 innocent Palestinian men, women and children. He likened the battle to the Warsaw Ghetto uprising, the Israelis to Nazis and the Palestinian terrorists to Jewish Holocaust victims.

A few months after President Donald Trump entered office, Erekat received a lung transplant in the United States. America’s lifesaving hospitality didn’t provoke any gratitude, or even politeness from Erekat, however. Since recuperating, Erekat has repeatedly condemned and insulted Trump and his senior advisers Jared Kushner, Ambassador David Friedman, former chief negotiator Jason Greenblatt and former Ambassador to the United Nations Nikki Haley. He wrote an op-ed in The New York Times insisting that the United States has no right to mediate negotiations between Israel and the PLO.

Despite his long and bloody record of lies and incitement and facilitation of terrorism, Erekat has never been called to account for his actions, much less paid a price for them. Now, perhaps, when it is clear to all that the PLO is irrelevant to peace, the time has finally arrived when he and his PLO colleagues will be treated like the malign terrorists and liars that they are and have always been.

Sher is right. There is no reason to grant Erekat a U.S. visa so he can come to Harvard and share his blood libels and his incitement of terrorism with American students.

Caroline Glick is an award-winning columnist and author of “The Israeli Solution: A One-State Plan for Peace in the Middle East.” This article first appeared in Israel Hayom.