Second Intifada: After 20 Years, What Changed — And What Hasn’t 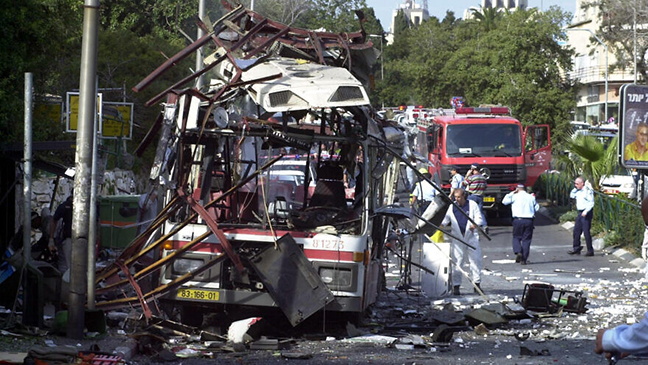 Police and rescue personnel work at the scene of a public bus bombing in the northern Israeli city of Haifa, Wednesday, March 5, 2003. A Palestinian suicide bomber blew himself up aboard the crowded bus, killing at least 12 people and injuring dozens. photo by Ronen Lidor/ Flash90

Police and rescue personnel work at the scene of a public bus bombing in the northern Israeli city of Haifa on March 5, 2003. A Palestinian suicide bomber blew himself up aboard the crowded bus, killing at least 12 people and injuring dozens. Photo by Ronen Lidor/Flash90.

(JNS) — The jubilant crowd gathered around the el-Bireh police station in Ramallah on that fateful day of Oct. 12, 2000, cheered when a terrorist came to the window and held up his hands, bloodied from lynching to death two Israel Defense Forces’ reservists who had gotten lost and entered Ramallah by mistake. The “Second Intifada,” or “uprising,” was being played out in full force, and the Arab world stood strongly behind the Palestinians.

Fast-forward 20 years. In an interview with Al-Arabiya television on Monday, Saudi Arabia’s former intelligence chief and ambassador to the United States, Prince Bandar bin Sultan, slammed the Palestinian leadership for criticizing the decision of the United Arab Emirates and Bahrain to normalize ties with Israel. Clearly, a lot has changed in the last two decades.

Michael Milstein, head of the Palestinian Studies Forum at the Moshe Dayan Center at Tel Aviv University, told JNS that the world is looking at “a totally different arena.”

Two decades ago, the Palestinians were led by Yasser Arafat and the Palestinian Authority. “Today, there are two leaders and two institutions,” he said referring to the P.A. and Hamas, which rules 2 million Palestinians in the Gaza Strip.

Milstein noted that on the eve of the negotiations in 2000, “there was a feeling that a political settlement was near.” However, “20 years later, most Palestinians believe there is no settlement on the horizon, certainly not one based on the two-state solution.”

More Palestinian youth have latched on to the idea of a one-state solution that would see all Palestinians becoming citizens of Israel, essentially wiping out the character of the Jewish state.

According to Milstein, “a very conspicuous” portion of young Palestinians believe in one-state “between the river and the sea.”

“It’s a nightmare for Israel,” he said. “It’s not good news. In Israel, we are not paying enough attention to this trend.”

Dan Diker, director of the Political Warfare Project at the Jerusalem Center for Public Affairs, told JNS, “20 years after the deadly ‘Al-Aqsa intifada,’ the Palestinians find themselves cornered or ‘checked’ with limited possible moves on the Arab Muslim majority Middle East chessboard.”

He noted that the Second Intifada was Arafat’s “Hail Mary pass” using violence and terror “to try and bury Israel, and drive it into submission.”

“It represented the end of Arafat’s acceptance of the Oslo presupposition of staging peace with Israel and was a return to the 1968 charter which called for the liberation of Palestine,” he said. “It was all framed in an Islamic context. It was called the ‘Al-Aqsa Intifada.’ Arafat’s goal was to mobilize the Muslim world against Israel.”

While many in the Muslim world believe even now that it was former Israeli Prime Minister Ariel Sharon’s visit to the Temple Mount in September 2000 that sparked the intifada, in reality, the Palestinian campaign of violence and terror was well-planned beforehand.

Palestinian Communications Minister Imad Falouji admitted at a rally in Lebanon in March 2001 that the intifada had been in the works and was not sparked by Sharon’s visit.

Diker said he rode in a car in Ramallah 10 years ago with a former member of the Tanzim, a militant faction of the Fatah movement, who told him Arafat ignited the deadly Second Intifada in order to try to overcome the popularity of Hamas.

“And that internal Palestinian story is the story that many people do not know,” he revealed.

According to that official, Diker said that “the Palestinian war with Hamas got played out in an intifada against Israel.”

A recent article by Al Jazeera characterized the intifada as “large, non-violent demonstrations that included civil disobedience and some stone-throwing,” but it went far beyond this into massive violence and terror, and there is plenty of video evidence to support this.

That strategy ultimately failed, and today, it has become unacceptable to much of the Arab and Muslim world.

‘Strategies of terror warfare and ideological warfare have failed’

Having been mostly defeated in their effort to terrorize Israel into submission, especially after Sharon launched “Operation Defensive Shield” in late March 2002 in response to two years of Palestinian terror and suicide bombings, the Palestinians pivoted to a different strategy.

According to Diker, “they moved from violence and physical terror to ideological warfare.”

This second battle against Israel was expressed through the 2001 Durban, South Africa platform and the establishment of the Boycott, Divestment and Sanctions (BDS) movement against Israel.

But according to Diker, “both strategies of terror warfare and ideological warfare have failed.”

“They overplayed their cards and lost three main audiences they had won over in the early ’90s: the Palestinian public, the Israeli public and the Arab world,” he said. “They lost all three.”

The Palestinians have largely lost the Israeli public as well. On the eve of Oslo in 1992, the Israeli Labor party had 44 seats. Today, the party has just three.

Perhaps most importantly, the Palestinians have lost a number of staunch supporters in the Arab world. Some Arab states are now saying they are more interested in protecting their own national interests, and that means working with Israel on a variety of pressing regional issues.

For those reasons, the UAE and Bahrain have crossed the threshold, and it looks probable that other Arab and Muslim countries will join them.

“The main problem is that there is no Palestinian leader who has been able to concede or recognize Israel as the nation-state of the Jewish people,” said Diker. “It goes against the charter. It goes against the ‘liberation of Palestine from the river to the sea’.”

Diker agreed with bin Sultan, who argued in his Monday monologue that the Palestinians consistently choose to be on the wrong side of history.

“They are on the losing side of this dispute,” Diker said of the Palestinians. “They have painted themselves into a corner, and the way they can get out of it is to cooperate quietly with Israel on daily issues.”

He continued, saying “the recognition of and normalization with Israel is the key. It is highly unlikely for there to be any progress unless the Palestinians do what the UAE did which is to recognize that there is a Jewish people and Jewish civilization. That’s why the agreement was called the ‘Abraham Accords’.”

Diker said the agreement with the UAE and Bahrain has put the Palestinians on notice. The region is moving forward without them, posing a major challenge because they had always counted on their having veto power over the Arab-Israeli conflict.

The main problem is the Palestinian’s refusal to recognize Israel as the nation-state of the Jewish people, explained Diker, adding that “the Abraham Accords uprooted the Palestinian ideological narrative and strategy.”

The P.A. leadership “can either join the expanding circle of Arab countries promoting peace and normalization with Israel, or submit to the Islamic ‘resistance’ network led by Iran, Turkey and to a degree Qatar,” said Diker. “Ultimately, their sustaining of the status quo, boycotting and defaming Israel, nullifying normalization, while financing and incentivizing terror will likely rain down disaster upon the Palestinian public.”

Diker noted that Palestinian society is split between supporting the P.A. or Hamas.

While there is growing Palestinian support for Hamas rule beyond the borders of Gaza, “nearly 35,000 Palestinian residents of Judea and Samaria work closely and profitably with Israelis in 15 industrial and commercial zones across the West Bank as they quietly seek to expand relations with their Israeli neighbor,” he noted.

Twenty years may have passed since the start of the Second Intifada, but it is still clear that the Palestinian issue remains stagnant; Palestinian strategies to delegitimize Israel have failed; and now Abbas has gotten himself up a proverbial tree.

According to Milstein, Israel can work to get Abbas off the tree, “but we must do it in a clever and sensitive way.”

Yet in the same breath, he said that as long as Abbas serves as the Palestinian leader, “very few changes will happen.”