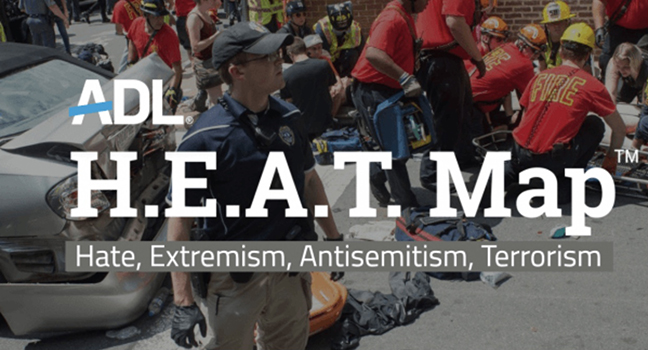 There are a growing number of haters on the far right, driven by white supremacy, antisemitism, anti-government radicalism, grievance mindsets and conspiracy theories.

These were among the takeaways from a recent online program on hard-right hate groups, sponsored by the Birmingham Jewish Federation’s Jewish Community Relations Council and featuring Amy Iandiorio of the Anti-Defamation League. Based in Atlanta, she is an investigative researcher with the ADL Center on Extremism.

Iandiorio refrained from estimating how many Americans have become affiliated with such ideologies because, she said, much of it is spread online which makes it hard to know how many people are involved in these movements. However, she left no doubt that ADL believes hateful ideologies emanating from the far right are an increasing phenomenon that can lead to growing violence.

Searching online bears out her comments. It is hard to find anything that estimates the number of Americans affiliated with far-right extremist groups.

ProPublica, a respected non-profit news site, recently offered this: “During the past decade, domestic terrorism surged in the United States. Some of the activity was on the political left… But many indicators show that far-right extremism is deadlier. Right-wing attacks and plots accounted for the majority of all terrorist incidents in the country between 1994 and 2020, according to a study by the Center for Strategic and International Studies.”

Those involved with these ideologies and networks feel that something is being taken away from them — by a cabal of evil forces beyond their control, and the time to act is now. The Jan. 6 Capitol insurrection is a reflection of this boiling resentment, said Iandiorio. Even though it was directed specifically at overturning the presidential election, it was driven by this overarching anger.

Some on the extreme right “believe the white race is under threat and that there is white genocide, and they must protect it for white children,” she said. “They believe a tide of color is coming to remove rightful white superiority.”

Their anxiety is no doubt heightened by U.S. Census data that suggests that in 20 to 25 years whites will be in the minority in America.

Included in the constellation of hate groups are hard-core antisemites such as neo-Nazis who, among other things, are Holocaust deniers, she said. Some on the far right also believe “that the entire American system is rotten because of ‘ZOG’,” Zionist Occupied Government.

ADL has invested substantial resources in tracking far right hate groups, making information available to the general public, educating law enforcement, and advocating for tougher measures when it comes to punishing those who have committed hate crimes.

Iandiorio mainly used slides to illustrate the depth and complexity of the problem, differences between groups on the far right, and the importance of recognizing the symbols and coded messages used by many on the far right.

Two groups Iandiorio mentioned — Oath Keepers and Proud Boys — have come to the forefront recently, in part due to their visibility and role in the violent attack and insurrection at the Capitol.

Oath Keepers, she said, “is especially important because they like to recruit former military and law enforcement people.” This group has a history of violence and arrests. They are an anti-government organization.

The group recruits disgruntled former military and law enforcement personnel in part because of their training and tactical experience. Some far right organizations like to “harness” such expertise “for their violent means.”

She added, “There are a number of individuals in the military and law enforcement who are affiliated with these groups and this is an issue that the ADL Center on Extremism has tracked for years.”

Proud Boys, she reminded the group, got thrust into the national limelight when then-President Trump, during one of the presidential debates, encouraged them to “stand down and stand by.”

She also mentioned QAnon, a conspiracy theory movement that originated online. It also has come to the forefront lately because of what has been seen by some as Trump’s tacit endorsement of the group through his support for Marjorie Taylor Greene, a newly elected Member of Congress from Georgia, who has espoused QAnon conspiracy theories.

QAnon followers believe that the country is controlled by dark forces and that Trump is the only person who can expose this and save the country, the ADL official said.

“Their conspiracy theories give alternative theories of reality. They give you different reasons to believe what is true and false. These beliefs can become widespread. QAnon has harnessed social media and people get co-opted.”

One feature of the ADL Center on Extremism is what the organization calls its H.E.A.T. map. The letters stand for “Hate, Extremism, Antisemitism, Terrorism.” The interactive map depicts the number of antisemitic and other hate incidents that have occurred in 2019 and 2020 in every state and in what part of the state.

In this region, the map showed 12 antisemitic incidents in Alabama, 19 in Louisiana, 21 in Mississippi, two in Northwest Florida. There have been some issues with Alabama’s reporting of hate crimes, so its total might be higher.

Iandiorio encouraged her audience to keep an eye out for extremism on social media and report it to ADL. “We know our community and other friends are our eyes and ears on the ground.”