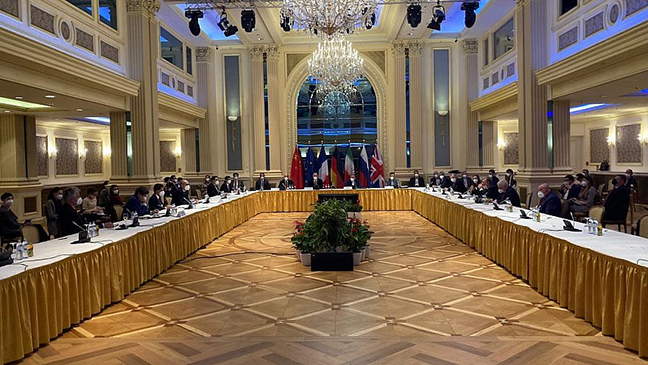 (JNS) — In recent days, conflicting reports have emerged over the ongoing negotiations in Vienna to revive the 2015 nuclear deal, leading to questions over to what extent the United States will undo Trump-era sanctions against Tehran.

Richard Goldberg, a senior adviser at the Foundation for Defense of Democracies, as well as an expert on Iran negotiations and sanctions, told JNS that he believes the reports coming out of Iran reflect leaks that the Islamic regime is already declaring victory at the negotiating table with the United States giving into 90 percent to 95 percent of the sanctions relief the Iranians had been seeking.

Goldberg said it appears that the administration has offered to lift a wide range of sanctions imposed on Iran by the Trump administration, including those placed for its sponsorship of terrorism and its ballistic-missile program.

Reportedly, he said, among sanctions that U.S. negotiators might agree to lift may include those on Iran’s central bank, national oil company, a tanker company and a petrochemical company in exchange for Iran re-entering the nuclear deal.

On May 2, Biden administration officials pushed back against reports in Iranian state media that America and Iran have reached an agreement to remove sanctions against the Islamic Republic as part of indirect talks between the two nations to restore the Joint Comprehensive Plan of Action, or JCPOA.

National Security Advisor Jake Sullivan, appearing on “This Week with George Stephanopoulos” on ABC News, contradicted reports from Iran that talks last month had closed in on an agreement.

“There’s still a fair distance to travel to close the remaining gaps,” he said, adding that work will continue in the coming weeks.

Additionally, the U.S. also rejected claims from Iran that it had reached a deal for a prisoner exchange.

‘Their pleas are falling on deaf ears in Washington’

Goldberg said that the United States may be giving up more than it’s getting in its effort to return to the original deal.

“The Iranians are agreeing to come into compliance with a deal that is already expiring in their favor with sunset clauses that have already begun, starting last year with the international arms embargo lifting,” said Goldberg. “It really makes no sense from a U.S. negotiation posture. We’re giving up historic leverage in exchange for compliance with an already flawed deal that is already expiring.”

The relief of sanctions, he said, would also go against policy instituted during the Obama administration that allowed the United States to impose economic sanctions on Iran for Iranian belligerence unrelated to its nuclear-weapon pursuits, such as supporting terrorism, and developing and proliferating long-range conventional missiles.

Throughout the current negotiations, Iran has stated that it would not rejoin the JCPOA unless these sanctions, which were put in place during the Trump administration and not part of the original nuclear deal, were also removed.

Goldberg said that the Biden administration is now claiming that these sanctions are illegitimate under the nuclear deal, something even U.S. Secretary of State Antony Blinken did not agree with during his Senate confirmation hearings.

“So a real question then is, if the Biden administration is going to lift terrorism and missile sanctions on Iran, rejoin a nuclear deal that’s expiring and not require Iran to declare all of its undeclared nuclear activities, how is this in any way in the best interest of U.S. national security?” posed Goldberg.

“On top of all of that, we see a Middle East today that has changed fundamentally from where it was in 2015 thanks to the Abraham Accords and the prospect of further normalization between Arabs and Israelis,” he continued. “That Middle East is speaking with one unified voice, very loudly and clearly to Washington: ‘Do not go back into the nuclear deal. Do not lift sanctions.’ But it appears their pleas are falling on deaf ears in Washington with a Biden administration that is dead set on returning to the nuclear deal and lifting sanctions.”

On April 30, U.S. President Joe Biden told Mossad director Yossi Cohen that the talks still have a long way to go to reach an agreement. Senior Israeli officials had been in Washington to relay their concerns about a possible return to the 2015 nuclear deal.

Barbara Slavin, director of the future of Iran Initiative at the Atlantic Council, told JNS that she remains “cautiously optimistic that the talks in Vienna will lead to a mutual resumption of compliance with the JCPOA by Iran and the U.S.”

“The Biden administration has pledged to remove all sanctions “inconsistent” with the deal, and I interpret that to mean sanctions on the Central Bank of Iran, Iran’s national oil company and shipping, and other important economic entities such as Iran’s automotive industry,” she said.

“The Trump administration made this harder by sanctioning these organizations and sectors under non-nuclear authorities but the intent — to prevent a return to the JCPOA — was clear.”

Slavin believes that while the deal remains controversial in both Washington and Tehran, she is confident that it will be restored.

Upping the ante in terms of more sanctions relief

Goldberg said the capitulations to Iran show desperation on behalf of U.S. negotiators to re-enter the deal, which he believes is fundamentally the wrong approach.

Tehran, he said, can drive up the price, such as demanding more sanctions be lifted than fall under the purview of the nuclear deal, such as the previous administration’s still-in-place sanctions on Iran’s metal industry, construction sector and financial holdings of its leaders.

Iran will also be looking for the United States to remove the Islamic Revolutionary Guard Corps to be removed from the list of Foreign Terrorist Organizations, which it was added to in 2019.

Even if an agreement was reached to bring Iran back into the nuclear deal, he said it remains questionable whether Iran would actually be in compliance with the deal. The International Atomic Energy Agency is investigating Iran for concealing undeclared nuclear activities and materials, which not only is a breach of the JCPOA, but of the Nuclear Non-Proliferation Treaty.

While there’s not much constituent support for the Iran deal, the Biden administration may just want to get the Iranian threat off the table and concentrate on other parts of its agenda.

To accomplish this, said Goldberg, the United States has to play into Iran’s “racket.”

“Iran extorts the international community through malign activities. There is a dollar amount placed on Iran temporarily suspending some of those activities, and if you pay that dollar amount, you will get some limited temporary change in behavior,” he said. “So you could have a White House that simply wants to kick the can down the road, pay the Iranian racket and make this issue go away for a few months.”