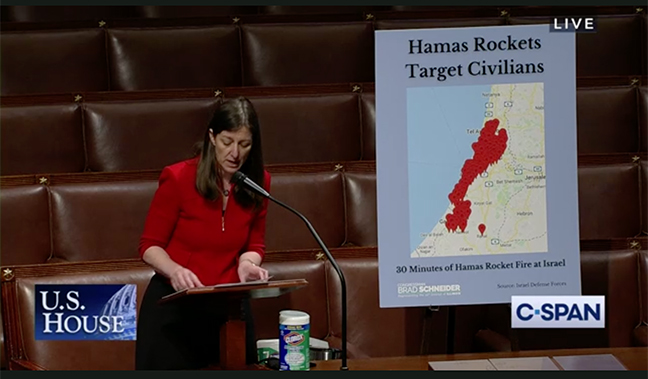 Rep. Eliane Luria (D-Va.), a Birmingham native, speaking on the floor of the U.S. House of Representatives on the conflict between Israelis and Palestinians. May 13, 2021. Source: Screenshot/C-Span.

(JNS) — Two blocs of Democratic members of the U.S. House of Representatives gave dueling speeches on the House floor on the evening of May 13, addressing the ongoing violence in Israel.

The speeches started with one-minute addresses from nine pro-Israel Democrats speaking in front of a poster with pins of where the more than 2,000 rockets fired by the terrorist organization Hamas had landed so far.

They said there were no comparisons between the State of Israel defending itself and the terrorist organization Hamas launching rockets at innocent civilians.

“In case there is any confusion, Hamas is a terrorist organization designated by the United States, dedicated to the destruction of Israel, and which Congress has and must condemn for killing innocent civilians and using women and children as human shields,” said Gottheimer. “No one here should make excuses for a terrorist organization. Who is the next target of their sympathy? ISIS? Al-Qaeda? Hezbollah? Between terrorists and democracy, we should always choose the democracy.”

Schneider, one of the organizers of the effort, said that Hamas was targeting frail seniors and children, who are huddled in fear while the terrorist organization launches rockets towards nearly every community in Israel.

“Israel has overwhelming resources to defend itself, yet shows restraint. Hamas’s rockets are intended only for death and terror. Thankfully, with [the] Iron Dome [air-defense system], Israel has the technology to protect the lives of its citizens which in turn protects Palestinian lives as well,” he said. “The U.S. stands with Israel, and must do all we can to end Hamas terror attacks and swiftly restore calm to the region.”

Sherman called each rocket sent by Hamas a war crime since they are aimed at civilians, and that the United States cannot accept at face value the reports of casualties in Gaza from Israeli airstrikes as the statistics come from Hamas itself.

Deutch said that Hamas is determined to wipe out the only Jewish state on earth and was launching rockets from schools and hospitals, using civilians and children as human shields. “Please don’t be fooled by false choices, Israel or Hamas. But if I am asked to choose between a terrorist organization and our democratic ally, I will stand with Israel every day of the week… ,” he said, reiterating that “America stands with Israel.”

“We have a duty as Americans to stand by the side of Israel in the face of attacks of suicide bombers and malign regimes who again have the same goal in mind: to kill Jews,” said Luria. “Now is the time to stand with Israel.”

While the speakers were all Democrats, Luria received applause from Republicans in the chamber.

Unlike the pro-Israel bloc, which all talked separately, Pocan’s group was given a one-hour special order slot by the House Progressive Caucus.

Pocan said their emphasis was not just about the violence that has occurred in the past week or the activities of the last month, but what has happened over the last year, decade and several decades, which he said has dehumanized and violated the human rights of too many people in the region.

While condemning Hamas’s rocket attacks, he said that it does not make a “both sides issue.”

“We must acknowledge and condemn the disproportionate discrimination and treatment that Palestinians face versus others in this region,” said Pocan.

He compared Gaza to an open-air prison, and that the roads and checkpoints those in the West Bank must live under far too often look like apartheid South Africa. He said this puts the United States at greater jeopardy, potentially leading it to intervene in the violence.

Tlaib, who has relatives in the West Bank, spoke for the longest duration, fighting back tears when speaking of the families with children who live in fear of dying from Israeli airstrikes.

She cited the organizations Human Rights Watch and the Jerusalem-based organization B’Tselem as calling the situation of the Palestinians in Israel “apartheid.”

“This is what Palestinians living under Israel’s oppression have been telling us for decades,” she said.

Tlaib added that reading the statements from U.S. President Joe Biden and U.S. Secretary of State Tony Blinken, one “would hardly know that Palestinians existed,” and that there has been no recognition of home demolitions or evictions, the detaining of children, sustained harassment of worshippers at Al-Aqsa mosque or of Palestinian humanity.

The same lack of acknowledgment, she claimed, also came from her House colleagues.

“Colleagues, Palestinians aren’t going anywhere, no matter how much money you sent to Israel’s apartheid government,” said Tlaib. “If we are to make good on our promises to support equal human rights for all, it is our duty to end the apartheid system that for decades has subjected Palestinians to inhumane treatment and racism.”

Omar slammed the United States for failing to condemn what she called Israeli human-rights violations in the name of self-defense and blocking actions in the United Nations condemning Israel.

McCollum, who chairs the defense subcommittee on the House Appropriations Committee, said that while she supports providing funding for Iron Dome, the $3.8 billion in military aid the United States provides Israel should have conditions.

“There is an Israeli military occupation that abuses and tortures Palestinian children, demolishes Palestinian homes and steals Palestinian land. The unrestricted, unconditioned $3.8 billion in annual U.S. military aid… gives a green light to Israel’s occupation of Palestine because there is no accountability and there is no oversight by Congress. This must change.”

Others, such as Pressley and Bush, drew comparisons between the plight of Palestinians and protests against police brutality in the United States, stating that the same tactics and methods used by police against the protests is being used by Israeli law enforcement against Palestinians.

“Palestinians are being told the same thing as black folks in America; there is no acceptable form of resistance,” said Pressley. “We are bearing witness to egregious human-rights violations.”

Schakowsky, who is Jewish, represented a more moderate, yet still critical view during the hour, saying she was horrified by violence from both sides. While she said Israel had a right to defend itself, the United States should play a role in trying to deescalate the situation.

She also said that she was deeply disturbed by Israel’s intention to evict Palestinian families from the Sheikh Jarrah district in eastern Jerusalem.

Earlier this week, the speakers signed onto a move, again led by Pocan, criticizing reports of Israeli evictions of a Palestinian family in a letter to Blinken. It was signed by 25 members of Congress. None of the Alabama, Mississippi, Louisiana or Florida panhandle representatives signed.

While those making speeches critical of Israel outnumbered the pro-Israel Democrats on May 13, a letter from April 22 against placing conditions on military aid to Israel was signed by 331 members from both parties.