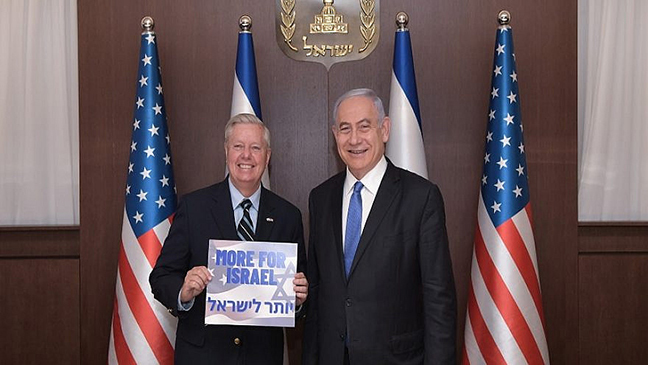 (JNS) — Sen. Lindsey Graham (R-S.C.) said on June 1 that Israel would be requesting a billion dollars in U.S. aid this week, in the aftermath of last month’s fighting with terrorist groups in the Gaza Strip.

In an interview with Fox & Friends during a visit to southern Israel, Graham said, “There’s going to be a request made, tomorrow, I think, or Thursday by the Israelis to the Pentagon for a billion dollars in aid to replenish the Iron Dome batteries that were used to protect Israel.”

The senator, who met with Israeli Prime Minister Benjamin Netanyahu on May 31, said the aid money would be “a good investment for the American people.”

During his visit with Netanyahu, Graham described Israel as “the eyes and ears of America,” and said that “nobody does more to protect America from radical Islam than our friends in Israel.”

“To every American, what happens with Iran matters not only to America but to the world,” he said. “The worst possible outcome for the world is to allow the Iranian regime to acquire nuclear capability.”

He also noted that America’s Arab allies “feel far more threatened by Iran than they do Israel.”

Graham said that he hoped to “find an alternative” to the Joint Comprehensive Plan of Action (JCPOA) from which former U.S. President Donald Trump withdrew in 2018—one “that would allow for nuclear power but not create a nuclear arms race through enrichment, and that’s the existential threat to the State of Israel and the world writ large.”

Graham toured Ashkelon on May 31 and June 1 together with Sens. Ted Cruz (R-Texas) and Bill Hagerty (R-Tenn.) to view some of the damage caused by Hamas during last month’s conflict. They visited the remains of a home struck by a rocket on May 11 which seriously injured an elderly woman, 81, and killed her caretaker, 32, who was from India.

During the 11-day conflict, terror groups in Gaza launched more than 4,300 rockets at Israel, according to the Israel Defense Forces. Of those, 680 misfired and exploded inside Gaza, while the Iron Dome system intercepted approximately 90 percent of the projectiles targeting populated Israeli areas, the IDF said.

Israeli Defense Minister Benny Gantz was set to head to the United States on June 2, for talks with senior U.S. defense officials focusing on the Iranian nuclear talks, his office announced on June 1.