Who really cares about the Palestinians? 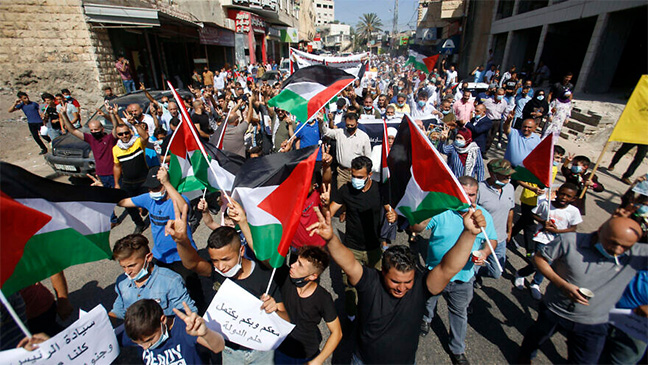 Palestinians hold flags during a rally in support of Palestinian Authority leader Mahmoud Abbas in the West Bank town of Tubas, Sept. 27, 2020. Photo by Nasser Ishtayeh/Flash90.

(JNS) — In the last several weeks, there has been a surge of interest about the conflict between Israel and the Palestinians. In the United States and much of the rest of the world, most of that concern has been focused on criticism of the Jewish state, its measures of self-defense against terrorism and its allegedly cruel treatment of Arabs living inside of Israel, in Jerusalem, the West Bank and Gaza.

The dilemma of those who seek to defend Israel’s conduct and even its right to exist as a sovereign Jewish state is that those who traffic in lies about “apartheid” and a cruel “occupation” generally do so by ignoring the complex history of the conflict. Their efforts concentrate on emotive images and human interest stories about suffering Palestinian such as The New York Times’ outrageous, poorly reported and ultimately misleading stories about children killed by the Israel Defense Forces and the collapse of an apartment building situated over a Hamas military facility that had been targeted.

It’s easier to tell stories about Arab victims than to explain that the reason that the conflict continues is because the Palestinians and their leaders have consistently refused every offer of compromise that might have led to peace over the last century. For the editors and reporters at the Times, the refusals of PLO chief Yasser Arafat and his successor, Mahmoud Abbas, of Israeli offers of statehood and peace in the last two decades are as remote as similar decisions that occurred throughout the 20th century. Add in the fact that left-wing ideologues masquerading as journalists motivated by intersectionality and critical race theory to demonize and delegitimize Israel and Zionism make up a growing percentage of the mainstream press corps; biased coverage is now purposeful rather than a function of ignorance or incompetence.

Lost in all of this is the fact that most of those who blast Israel in the media or on the floor of Congress in the name of sympathy for the Palestinian people don’t really care about them.

How is that possible? The disproportionate amount of attention they get surely is a measure of international sympathy. After all, the approximately 250 Palestinians killed in the May fighting — the majority of whom were Hamas and Islamic Jihad operatives and fighters — got more coverage than the hundreds of thousands of Arabs killed during the recent Syrian Civil War by the Bashar Assad regime, Iran, Turkey and Russia, let alone a score of other recent far bloodier conflicts in Asia and Africa.

In fact, sympathy for the Palestinians is quite selective. For all of the endless rhetoric and often misleading stories about them being oppressed by Israel, there is relatively little interest on the part of the media about the very real oppression of Palestinians by their own leaders and governments.

For example, in just the last week, the international media that obsesses over every action of Israel and treats lawsuits over property rights, such as that about Jewish-owned homes in the Sheikh Jarrah neighborhood of eastern Jerusalem being occupied by non-rent paying Arabs, to be of earth-shaking interest and a reasonable casus belli for Hamas terrorism, has largely ignored or buried news about the tyranny of the Palestinian Authority.

A Palestinian critic of P.A. leader Abbas was arrested and beaten to death by one of the 17 security services at his disposal. That led to hundreds of Palestinians protesting against his rule. Nor is this an isolated circumstance. The P.A.’s jails are filled with those who have dared even to speak against Abbas and the Fatah Party. His government rules most of the West Bank with an iron fist, despite the assumption on the part of most Westerners that it is under “occupation” by Israel.

Well known as a kleptocracy that exists by fraud and criminality, and which also does its best to suppress any independent economic development or efforts to create good government, the P.A. is a criminal enterprise disguised as a nationalist movement. It provides income for many Palestinians in the same way that corrupt political machines have always done so. The price for their limited largess, however, is obedience to the party and its leader.

Unfortunately, the growing opposition to Abbas is largely made up of Islamist adherents of his Hamas rivals.

Abbas, currently serving the 17th year of a four-year term as president to which he was elected in 2005, put off the elections that were supposed to be held this year because he rightly feared being defeated in them. It was this event that motivated him to try to distract his people by embracing the Sheikh Jarrah controversy and which, in turn, led Hamas to upstage him by firing more than 4,000 rockets into Israel.

Meanwhile, the 2 million Palestinians who live in Gaza languish under the even more brutal tyranny of Hamas, which rules that area as a theocratic state where dissent is squelched.

Yet those who weep crocodile tears for civilians killed as a result of Israeli counterattacks against Hamas rocket and missile fire are mum about anything that Abbas or Hamas does.

By contrast, Arabs who live in Israel enjoy not only democracy, including the right to vote, but hold seats in the Knesset and are now represented in the current government coalition, as well remain equal under the law, as opposed to being widely and falsely depicted as living under “apartheid.”

Rather than dispute Israeli attacks on Hamas or the blockade it enforces along with Egypt against the terrorist-ruled enclave, people who actually cared about peace should support the overthrow of Hamas. Instead, they give impunity to a group whose purpose remains to fight to eliminate Israel and evict the Jews from their ancient homeland, while ignoring their own residents in the process.

Similarly, those who talk about the “occupation” of the West Bank are not only indifferent to the plight of the millions who suffer under Abbas’s misrule, but wish to further empower him at the expense of Israel’s security.

The fact that the Palestinian national movement is led by movements and leaders who are as undemocratic as they are corrupt and bloody-minded doesn’t mean that Israel is perfect. Yet those who buy into the narrative of Palestinian victimhood not only regard what Arabs do to each other as not as interesting as what Israel supposedly does to them. They also treat the entire subject of Palestinian brutality as a non-issue and dismiss the entirely reasonable Israeli refusal to put themselves at the mercy of such people.

If those leading the charge to punish Israel were serious about wanting to help the Palestinians, they’d concentrate their fire on Abbas and Hamas and seek to support those few brave souls who seek their overthrow and replacement by those who believe in liberal democracy and peace, no matter how unlikely that might be.

But besotted by intersectional myths about Israel being a function of colonialism and an expression of “white privilege,” they strip the Palestinians of any agency in their fate or conduct. This illustrates the basic truth that critical race theory, especially as it applies to the Middle East, both infantilizes Arabs and regards them solely as political props to be used to attack their preferred villains.

Seen in this light, it’s clear that most of those who speak about Palestinian suffering actually couldn’t care less about them. What they want is to single out and destroy Israel, victimizing its Jewish population and stripping them of their rights. Rather than an expression of sympathy for Palestinians whose leaders have condemned them to fighting a never-ending war they can’t win, too many of the critiques of Israel recently voiced on the left must be seen as rooted more in anti-Semitism than concern for anyone’s human rights.