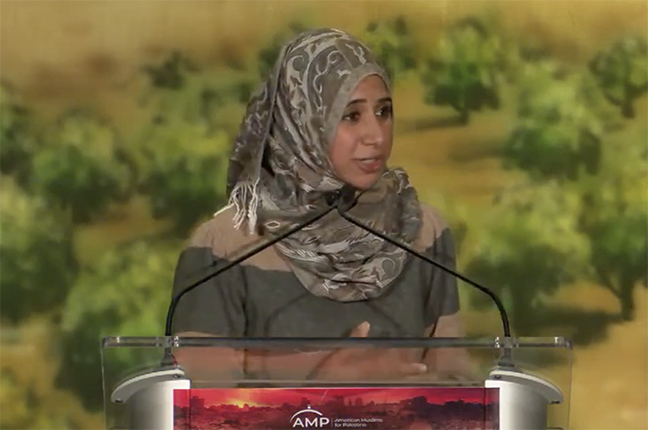 Zahra Billoo speaks at the American Muslims for Palestine conference on Nov. 27. Screenshot.

At a major Muslim gathering in Chicago, the head of the Council on American-Islamic Relations in San Francisco warned that most of the American Jewish community is the enemy of Muslims.

Zahra Billoo spoke on Nov. 27 at the American Muslims for Palestine annual conference in Chicago, “On The Road to Free Palestine.” According to the Anti-Defamation League, AMP is “the leading organization providing anti-Zionist training and education to students and Muslim community organizations in the country,” which “promotes extreme anti-Israel views and has at times provided a platform for anti-Semitism under the guise of educating Americans about ‘the just cause of Palestine and the rights of self-determination’.”

CAIR portrays itself as the leading American Muslim human rights organization, whose mission is “to protect civil rights, enhance understanding of Islam, promote justice, and empower American Muslims.” Many Jewish organizations have worked with CAIR on joint ventures, and CAIR often condemns attacks on Jews in America.

However, CAIR leaders have a long history of attacks on Israel, and several founders have ties with Hamas, a recognized terrorist group, and the extremist Muslim Brotherhood. In 2014, the United Arab Emirates listed CAIR as a terrorist entity.

At the same conference, CAIR co-founder and executive director Nihad Awad referred to Tel Aviv as being “occupied” and prayed for its liberation.

In her remarks, Billoo said Muslims need to pay attention to several groups in America — the ADL; the Jewish Federations, which are the local umbrella organizations for Jewish communities nationally; “the Zionist synagogues,” which would comprise the vast majority of U.S. synagogues; and the “Hillel chapters on our campuses,” which are the main address for Jewish students at universities across the nation.

Billoo said “just because they are your friends today, doesn’t mean that they have your back when it comes to human rights… oppose the vehement fascist, but oppose the polite Zionist too. They are not your friends. They will not be there for you when you need them. They will take your friendship and throw your Palestinian brothers and sisters under the bus.”

She told those in attendance to donate monthly to AMP, because if they pay taxes to the U.S., “ you are contributing to the apartheid monthly.”

Even left-wing Jewish organizations were called out by Billoo, such as J Street and Peace Now. She said any organization that claims not to be Zionist but which supports a “laughable” two-state solution is “working to harm you.”

She suggested building coalitions with the fringe anti-Israel groups Jewish Voice for Peace and IfNotNow, because the other Jewish organizations “would sell you down the line if they could, and they very often do behind your back.”

The two-state solution has long been seen as a solution to the Israel-Palestinian issue, with two states living side by side. Increasingly, anti-Israel activists have called that a betrayal, insisting that all of Israel, even pre-1967, is occupied, and the only just solution is a single state, which would involve the destruction of Israel.

While many insist a bi-national state would protect the rights of all, a large proportion of anti-Israel activists insist that Israeli Jews would have to leave and go back to where they came from.

In September 2019, when three founders of the Women’s March left the board over accusations of antisemitism, Billoo was one of those named to replace them. After three days of adverse publicity over replacing board members accused of antisemitism with someone who was “promoting extreme anti-Zionism and conspiracy theories” on her social media, Billoo was voted off the board.

David Lange of the IsraellyCool website said “Bilhoo’s speech should be considered dangerous incitement against the US Jewish community.”

Responding to Awad’s remarks about Tel Aviv, Gil Troy, who writes about antisemitism and teaches North American history at McGill University, told the Investigative Project on Terrorism that Awad “was being honest — unlike most of his comrades. His brutal honesty — which essentially calls for a new anti-Jewish genocide 75 years after Auschwitz — exposes the lie that Palestinian extremists like him would be satisfied with any kind of compromise. It makes it clear that the hatred against Israel has to do with what Israel is — a Jewish democratic state — not what Israel does. And it should confront many Americans — including some deluded Jews — with the uncomfortable facts that this main obstacle to peace in the Middle East is not Israel’s presence in the territories, but Palestinian fanatics’ rejection of Israel’s presence — period.”