World Games: Israel’s first with a team competition, in lacrosse 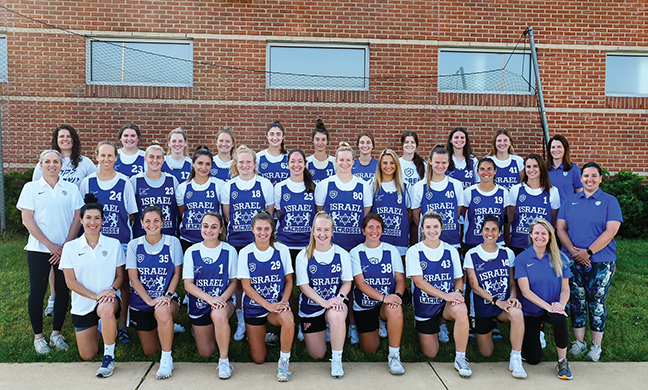 (Israel InSight) — The only team sport for Israel in the World Games is men’s and women’s lacrosse, and the teams are excited about taking the field in Birmingham.

One particular bit of excitement comes from women’s team member Olivia Mannon competing in the city where she grew up.

The Israeli team is comprised of Israeli-based and U.S. players who have made Aliyah. There were two evaluation weekends last fall, in Baltimore and Boston, after which the roster was named.

The roster is being divided, as the World Lacrosse Championships will be held at Towson University in Maryland from June 29 to July 9. “We decided who fit well where depending on their skills,” Alex Freedman, director of high performance for Israel Lacrosse, said.

Scott Neiss, founding director of Israel Lacrosse, said the World Games will be the debut of the “Lacrosse Sixes” format that was invented last year “as lacrosse tries to best position itself for Olympic inclusion in 2028.” He said it will be a new experience for everyone, as there have been just a handful of exhibition matches thus far.

A faster-paced format, Sixes will feature six players on the field instead of the traditional 10; Sixes is played on a 70-by-36 meter field with a 30-second shot clock.

Freedman said there will be four eight-minute quarters, and there will be just one draw per quarter, as goalies will initiate play after a goal, instead of there being a draw. “It’s a much quicker game,” she said, with substitutions “on the fly.”

She hopes the World Games tournament will be the “springboard” for lacrosse becoming an Olympic sport. It was in the 1904 and 1908 Olympics.

“We are really excited for this opportunity to compete in a multi-sport event,” Freedman said. The World Games is also important in terms of procuring support from the Israeli government. Each of the players has an online fundraiser for the Games.

There will be 12 men and 12 women competing for Israel in Birmingham.

Among the players who will be in Birmingham is Rachel Rosen, a veteran of the 2019 team, who played collegiately at Penn State and “has spent a significant amount of time in Israel helping grow the game,” Freedman said. “She is a strong attacker, you will see her name on the stats sheet.”

Rosen said that the World Games will be the first opportunity for her parents to see her in the blue and white “and I could not be more excited to have them with me.”

Also on the team is MacEllen McDonough, program director for Israel Lacrosse. She played collegiately at Jacksonville University and has been on the Israel national team since 2019. Freedman said she coaches youth teams and is “the best role model for our youth players.”

Aside from Mannon, another Birmingham connection to Israel Lacrosse is in Freedman’s most memorable moment of her lacrosse career — the cleats exchange between the Israeli and Kenyan teams at the U19 world championships in Canada in 2019.

During Israel’s match against Kenya, the Kenya team kept slipping and falling. At dinner that evening, Michael Duvdevani of Birmingham wondered why that was the case, and his daughter Ella, who was competing on the U19 team, said Kenya did not have cleats, though they had been given sneakers.

Duvdevani, who owns a pedorthic clinic in Birmingham, organized the other parents on the Israel team and collaborated with the Kenya coaches, then went out to find proper cleats for the Kenya team. The Israeli team surprised the Kenyan players with the new cleats before the Israel-Belgium match the next day, which the Kenyans were attending.

That act made international news and was featured on ESPN. The Israeli team then wound up playing Kenya for 17th place, and the rematch, which Israel also won, was a lot closer than the first time.

The men’s tournament includes Australia, Canada, Germany, Great Britain, Israel, Japan, United States and Haudenosaunee. Each time slot features two matches, all of which will be at PNC Field at UAB. Play opens for the men on July 8 at 10:30 a.m. with Israel facing Japan in the second game. The U.S. takes on Germany in the second match of the 2 p.m. block.

On July 13, Israel faces Canada at 2 p.m., followed by Japan and the U.S. On July 14 at 2 p.m., it will be Israel against Great Britain, and the U.S. against the Czech Republic.

Tickets are available at twg2022.com.