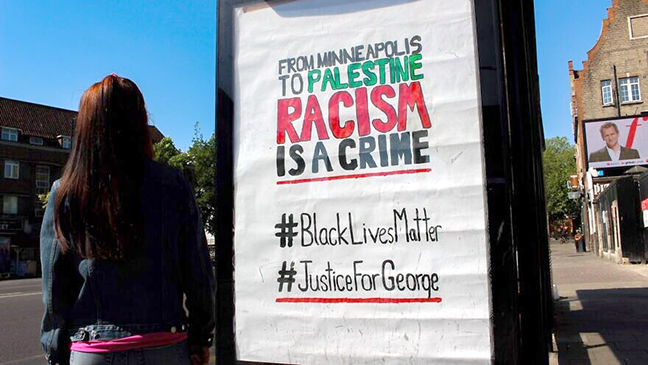 A poster from a protest in London linking Black Lives Matter movement to the situation facing the Palestinians. Source: Apartheid Off Campus via Facebook

(JNS) — Groups on the far-right and far-left, including pro-Palestinian organizations with links to terrorism, have been engaged in a campaign to co-opt the Black Lives Matter movement to target and delegitimize Israel.

“The cynical use of the Black Lives Matter by groups backed and controlled by foreign terror movements is nothing less than a repeat of the many other times that terror groups have used human shields to push their violence and hate,” Mark Greendorfer, president of the Zachor Legal Group, told JNS.

A “civil-rights movement (Black Lives Matter) has been hijacked by extremists to push an agenda focused on promoting hate, in the form of anti-Semitism, rather than seeking justice,” he said.

Last week, it was widely reported when several Jewish institutions were targeted during protests in the Fairfax District of Los Angeles, which included vandalism to Jewish businesses and synagogues, such as Congregation Beth El, which was vandalized with graffiti stating “Free Palestine” and “F*** Israel.”

While these incidents drew headlines and condemnations, several far-left anti-Israel groups have been engaged in a campaign on social media and in protests blaming Israel for police violence and linking the Black Lives Matter movement to Palestinian uprisings.

In particular, anti-Israel groups have been using the protests over the public murder of 46-year-old George Floyd in Minnesota by a police officer to target the Jewish state over past training programs set up between the United States and Israeli police departments.

“This is where the Minneapolis Police Department learned their police brutality tactics from. israeli occupation terrorist soldiers (on the left) murder Palestinians on a daily basis. We must stop training our American police officers to be gestapo units. #GeorgeFloyd #Palestine.” tweeted Abbas Hamideh of the group Al-Awda, a pro-Palestinian BDS group.

Similarly, the US Campaign for Palestinian Rights and a student leader in Students for Justice in Palestine (SJP) also blamed Israel for the police tactics.

Over the past week, JVP’s campaign has spread and become a popular conspiracy theory among anti-Israel activists, according to the Canary Mission, an anti-Semitism watchdog group.

“Anti-Israel activists have claimed that Israel and American Jewish organizations are responsible for police brutality resulting in the deaths of black people, such as George Floyd,” said the Canary Mission. “They state that U.S. police forces are trained by Israel to deliberately use brutal methods of policing. They further claim that this training is organized and sponsored by the American Jewish community.”

At the same time, several pro-Palestinian BDS groups have applied violent terms such as intifada (Arabic for “uprising”) to the current eruption of protests in the wake of Floyd’s death.

The term was the name given to the first and second Palestinian bouts of violence in the late 1980s and early 1990s, and then from 2000 to 2005, which witnessed daily terror attacks, including suicide bombings, stabbings and shootings against Israeli civilians, claiming thousands of lives.

In a Facebook post, the group Samidoun, which advocates for Palestinian prisoners and has ties to the U.S.-designated terror group the Popular Front of the Liberation of Palestine, called the Floyd protests an “intifada.”

“We support the uprising in Minneapolis, the intifada of people subjected to an ongoing, vicious and structural racism, inheriting a lengthy and rich tradition of Black resistance, organizing and struggle,” wrote the group.

In a statement, PFLP also expressed its solidarity with the protests.

“It is not surprising for a country like the United States, which has a strategic alliance with the Zionist entity [Israel], to intersect with it in the discrimination, racism and repression that embodies its treatment of Palestinians,” the terror group wrote on its site.

‘There is no connection between the struggle’

Meanwhile, far-right neo-Nazi individuals and organizations have also been blaming Jews for the violence associated with the protests.

Andrew Anglin, founder of the Neo-Nazi website Daily Stormer, wrote in a blog post about the protests, saying “Fear not the blacks who can burn your city, but fear the Jews who can release the blacks to burn your city and lock you in your house in hell.”

Similarly, the far-right is also claiming that the violent protesters are being controlled by Jewish money.

“They [Jews] Are Starting a Race War So People Don’t Rally Against ZOG [Zionist Occupation Government],” wrote neo-Nazi Kyle Hunt, according to the Canary Mission.

Hunt, who is also a supporter of the BDS movement, has previously joined anti-Israel groups IfNotNow (INN) and Al-Awda in protesting against the American Israel Public Affairs Committee in 2017, according to the Canary Mission.

At the same time, pro-Palestinian activists have also sought to link and draw parallels between police violence in America and violence against Palestinians by Israel.

In what has been termed “intersectionality,” these groups posit that no form of discrimination is distinct from one another.

Following the killing of Floyd, anti-Israel activists immediately began drawing comparisons with what they describe as systematic and deadly Israeli brutality against Palestinians. Those comparisons were given further impetus in the wake of the May 30 killing of Iyad Halak, an autistic Palestinian from eastern Jerusalem, by Israeli police in Jerusalem’s Old City.

Drawing on this, several social-media posts depicted U.S. and Israeli police as one and the same on social-media imagery.

In a picture shared on Twitter by “Los Otros Judios,” it depicts an Israeli and American police officer embracing while kneeling on the necks of a Palestinian and a black man, respectively.

Similarly, a picture shared by the Jordanian cartoonist Emad Hajjaj on Twitter depicts the U.S. and Israeli flags as the same color, while also having the knees of soldiers on the necks of a black man and Palestinian.

Greendorfer said that “there is no connection between the struggle of blacks against racism, and the conflict between terrorists and Jews seeking to live in peace in their homeland.”

Instead, he said that many of the progressive groups supporting the Black Lives Matter movement should instead look at Israel “as an example of a tolerant, inclusive and fair society, one that welcomes LGBTQ individuals, fights against terror groups that engage in the slaughter of innocents and minority groups.”

“It’s possible, and, indeed, ethical,” he noted, “to support the call for police accountability and an end to discrimination without joining a terror backed call for the destruction of the country and increased discrimination (against Jews, Israel and those who support Israel).”