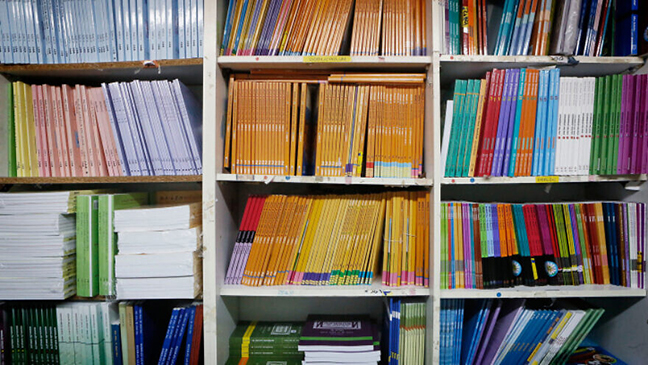 School books for sale in a bookshop in the center of Jerusalem. Schools all over Israel begin the first day of the new academic school year tomorrow. AUgust 26, 2013. Photo by Miriam Alster/FLASH90

(Israel Hayom/JNS) — A European Union-sponsored study to examine whether textbooks used by schools in the Palestinian Authority incite against Israel actually examined textbooks in Arabic used in the Israeli school system.

The study concluded that P.A. textbooks not only do not incite against the Jewish state, but actually promote coexistence between Palestinians and Israelis.

The study was ordered by former E.U. Foreign Affairs and Security Policy chief Federica Mogherini, following criticism from E.U. lawmakers and non-governmental organizations that the E.U. was essentially funding incitement against Israel, rather than educating toward peace.

With that, IMPACT-Se, an international research and policy institute that analyzes school textbooks throughout the world, and that has a proven track record of examining P.A. textbooks, suspected from the outset that the E.U. study was unprofessional and intended to whitewash the facts.

To conduct the study, the E.U. hired the services of the Georg Eckert Institute for International Textbook Research. The study, portions of which were obtained by Israel Hayom, consists of incorrect translations from Arabic to English. Although the editing process for the study was completed some time ago, the E.U. has repeatedly delayed the publication of its conclusions.

It has now become apparent, as well, that the study also failed to distinguish between Palestinian textbooks and Israeli Arabic-language textbooks used by schools in eastern Jerusalem. These are textbooks that were written in the P.A. but, before being approved for use by the Israeli Education Ministry, were heavily edited to replace anti-Israel content with messages of tolerance and peace.

In an internal presentation by the Eckert Institute, under a chapter titled “Changes in Textbooks,” researchers claim that the P.A. curriculum for eighth-grade students had been modified.

“Five examples pertaining to the conflict with Israel were replaced with examples promoting peace and tolerance toward Israel,” the researchers said. The researchers also cited cooperation between Israeli and Palestinian firefighters, and claim that this was taught to Palestinian school children in the P.A.

However, IMPACT-se found through its own inquiry that the European researchers quoted from textbooks that had already been edited by Israel’s Education Ministry, and do not appear anywhere in the Palestinian Authority’s education system.

“The study was a comedy of errors from start to finish. The researchers ‘researched’ the wrong textbooks. They looked at textbooks from Arab schools in Jerusalem and presented them as coming from the Palestinian Authority. The study includes embarrassing sentences in basic Arabic and lacks familiarity with Palestinian culture; and oddly, it also quotes from a study that doesn’t exist.”

The E.U. said in response: “The study includes textbooks from east Jerusalem, but these are not Israeli textbooks. The study, which began in September 2019, will be published at the end of 2020 as planned.”