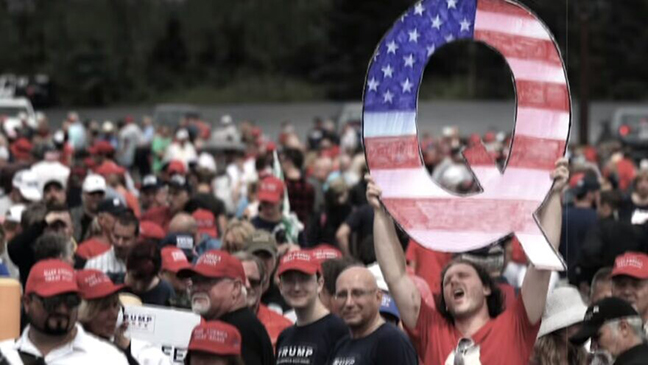 A QAnon supporter at a rally for U.S. President Donald Trump. Source: YouTube.

(JNS) — The word QAnon — and the conspiracy theories behind it — keep making headlines of late.

Marjorie Taylor Greene, a Republican congressional candidate who touts the ideology, won her run-off in Georgia on Aug. 11 and recently got a shout-out by none other than U.S. President Donald Trump, who congratulated her, even calling her a “future Republican star.”

QAnon began in October 2017 with an anonymous user named “Q” on the imageboard website 4chan who claimed to have classified information surrounding the Trump administration and its critics. It is described as a conspiratorial movement that purports that the so-called liberal elite, including Democratic politicians and Jewish billionaire George Soros, are part of a secret political faction to overthrow Trump.

“QAnon conspiracies are centered around the idea of a powerful elite secretly manipulating current events,” Counter Extremism Project senior research analyst Josh Lipowsky told JNS. “QAnon subscribers have politicized the conspiracies around an imagined Democrat-led ‘deep state’ conspiring against Donald Trump, who is heralded as the only one who can defeat this menace.”

Lipowsky labeled QAnon “a modern-day version” of The Protocols of the Elders of Zion, which QAnon echoes in its conspiracy theories, in that “the primary goal is to shift blame.”

“At the center of these conspiracies is a secretive cabal with vast political and financial power,” he explained. “Certain people want to believe that there is really an all-powerful group controlling things because it removes the onus of personal responsibility for one’s own circumstances and creates a scapegoat for larger catastrophes. The economy is crashing? A virus is spreading throughout the world? It must be because of X. And historically, X has usually meant the Jews.”

Protocols, an infamous and classic anti-Semitic text that was shown to be plagiarized from several earlier sources, was first published in Russia in 1903, translated into multiple languages and disseminated internationally in the early part of the 20th century.

Although QAnon conspiracy theories “don’t all target Jews,” said Lipowsky, “they use the same strategy that anti-Semites have used for centuries.”

Lipowsky cited “the conspiracies QAnon is peddling with the coronavirus, blaming Bill Gates for creating the virus or seeking to implant microchips into vaccines,” in that “it’s all reminiscent of the baseless accusations the Jewish community has faced—from responsibility for the black plague by poisoning the wells of Europe to the Rothschilds’ manipulation of World War I and the Great Depression for financial gain. Like those historic anti-Semitic conspiracies, some of the QAnon conspiracies target the Rothschilds or other wealthy and powerful Jewish individuals.”

QAnon followers have also been connected to acts of violence, kidnapping, murder and public misconduct, according to the Anti-Defamation League. The suspect behind the April 2019 shooting on the last day of Passover at Chabad of Poway near San Diego, where one person was killed and three others injured, posted his intentions on the imageboard website 8kun, which is used by QAnon adherents.

‘Given us good reason to be alarmed’

As with most, if not all, conspiracy theories, the Jewish community is not immune from QAnon and must be vigilant and combat it, according to Jewish groups.

“Any group that traffics in conspiracy theories about world domination, or control of banks and the media, is a group we need to be deeply concerned about,” B’nai B’rith International CEO Daniel Mariaschin told JNS. “Our community’s experience in combating these tropes has given us good reason to be alarmed.”

“QAnon is a Jew-hating conspiracy theorists group claiming the Rothschilds, a Jewish banking family, plans to kill non-Jews, start a world war and undermine the Trump administration,” Zionist Organization of America president Mort Klein told JNS. “In an era of rising unbridled hatred of Jews and the Jewish state, such insane theories are gaining adherents and must be exposed and fought.”

That said, some find it troubling that the president has declined to condemn the movement.

“Conspiracy theories with tenuous ties to reality very often include Jews in some sinister capacity,” Yaakov Menken of the Coalition of Jewish Values told JNS. “When you know what to look for; you see supporters of both QAnon and [Black Lives Matter] saying the same things, and that should require our attention.”

Rabbi Abraham Cooper of the Simon Wiesenthal Center told JNS that “QAnon is all conspiracies, all the time. Since its inception, the Internet has provided life support for debunked conspiracies, breathing life back into some nefarious stereotypes.”

He added that it echoes The Protocols of the Elders of Zion and its scapegoating of the iconic Jewish philanthropic Rothschild family in what Cooper summarized as the “powerful, manipulative banker.”

Jonathan Sarna, the Joseph H. and Belle R. Braun Professor of American Jewish history at Brandeis University, said of QAnon that “it is clear that many of its members harbor dangerous conspiratorial fantasies drawn from the pages of The Protocols of the Elders of Zion. The notion that a small number of wealthy Jews manipulate governments and control the course of world events has in the past served as a warrant for genocide.”

‘All rooted in the same anti-Semitic archetype’

Mary Ann Mendoza, a speaker who was scheduled to give an address on Aug. 25 at the Republican National Convention, was taken off the program on Tuesday night after sharing to her more than 40,000 Twitter followers earlier in the day a QAnon thread from an unverified account that included a post that read: “‘The Protocols Of The Elders Of Zion’ Is Not A Fabrication. And, It Certainly Is Not Anti-Semetic [sic] To Point Out This Fact.”

“From my experience, I’ve observed that when it comes to anti-Semitism, you won’t be hard-pressed to find it and, in our case, you will definitely find anti-Semitism within the QAnon movement,” he told JNS.

“Anti-Semitism is an ancient as the Jews themselves, and there will always be those who utilize it for political gain,” he continued. “As far as the QAnon movement, it was most likely started as a joke. People will always cling to something that explains the logic behind the strange reality which we live in.”

However, Moskowitz cautioned that QAnon is “probably not” inherently anti-Semitic, though he said he wasn’t “one of those guys who looks for anti-Semitism under every pebble.”

“With that said,” he emphasized, “we must remain vigilant and defer to organizations that have the capacity to track these things and hope that they continue to do so.”

Regarding Greene, who called Soros a Nazi, the Republican Jewish Coalition instead endorsed her opponent in the run-off, neurosurgeon John Cowan, and fundraised for him.

At least two organizations that combat anti-Semitism told JNS they are currently assessing the movement.

Jewish Council for Public Affairs president and CEO David Bernstein said that his organization “been asking ourselves the same questions, but really haven’t done the research yet,” while StopAntiSemitism.org executive director Liora Rez said, “We honestly do not know enough the movement, who’s behind it, etc… to comment on it.”

Nonetheless, “the fight against anti-Semitism must include fighting against misinformation and these types of conspiracies,” said Lipowsky. “While not all of these conspiracies paint Jews as the shadowy villain, they are all rooted in the same anti-Semitic archetype and history has shown that eventually these sorts of things usually refocus on the Jewish community.”